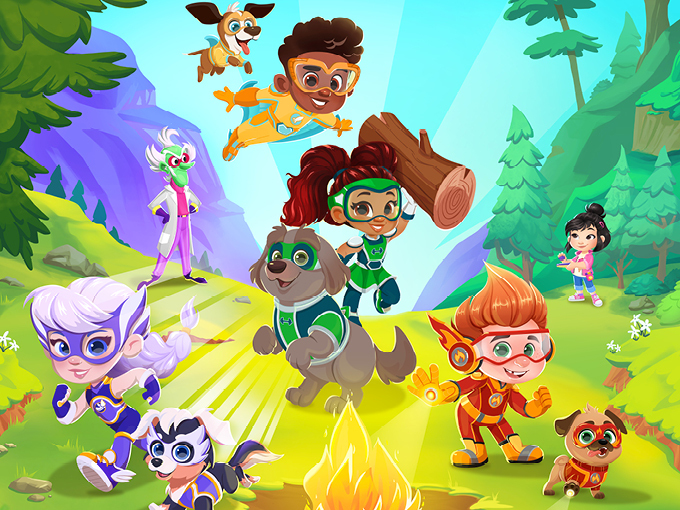 Redeveloped to combine two shows into one, S.M.A.S.H! will bow on the streamer, as well as on Super RTL and Discovery Channel, in 2022.

HBO Max has picked up exclusive first-window SVOD rights in the US for 41 Entertainment’s upcoming CG-animated series S.M.A.S.H!, which will premiere globally in 2022.

And in linear news, Super RTL secured exclusive rights for German-speaking Austria, Switzerland and Germany, with Discovery Family Channel and Discovery Familia exclusively acquiring the show in the US.

An action-adventure series for four- to seven-year-olds (52 x 11 minutes), S.M.A.S.H! stars a diverse team of kids with superpowers who are training with their equally gifted dogs at the SMASH camp. Created and executive produced by 41 Entertainment managing director Allan Bohbot, the show is based on an original idea by writer Kaaren Lee Brown, who developed it for TV by Kiersten Halstead, 41 Entertainment’s VP of acquisitions, productions and development.

S.M.A.S.H! was actually two different shows (Superhero Summer Camp and Superhero Pets) originally, which were announced in 2018. 41 Entertainment has since blended them into a single series, according to a spokesperson for the prodco. (S.M.A.S.H! includes some elements from both of those series, but the storylines, designs, main characters, and core concepts are new, the spokesperson added).

The new deal marks a slight departure for HBO Max, which hasn’t acquired much kids content since its launch, focusing instead on brands from the WarnerMedia library, such as the new Looney Tunes.

41 Entertainment is the studio behind Super Monsters on Netflix, Kong King of the Apes and Tarzan and Jane. Last year, it expanded into animation for young adults with the adaptation of The Supernatural Academy book series and new sci-fi series Roswell Conspiracies.