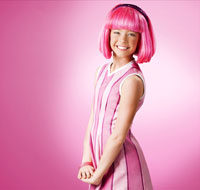 New to the series, 10-year-old American competitive dancer Chloe Lang takes over the lead female role of Stephanie from Julianna Rose Mauriello, and special effects will be created by Turner Studios in Atlanta (Ben 10, Level Up, Matrix and X-Men).

Since Turner acquired the Lazytown brand in September 2011, it has secured promo and licensing deals with partners including UK public health program Change4Life, which encourages preschoolers to be more active and eat healthier food, NCircle Entertainment to launch Lazytown DVDs in the US this year, and Turner CN Enterprises (TCNE) most recently inked a deal with UK juice supplier Gerber Juice Company for a range of nutritious beverages that are now sold in more than 300 of grocer Sainsbury’s UK stores.

The brand has also expanded into live shows, music, games, radio and publishing. The series currently airs in more than 100 countries worldwide and is expected to be a landmark property for UK preschool channel Cartoonito. Turner will air seasons one and two on Turner channels before season three reaches viewers next year.