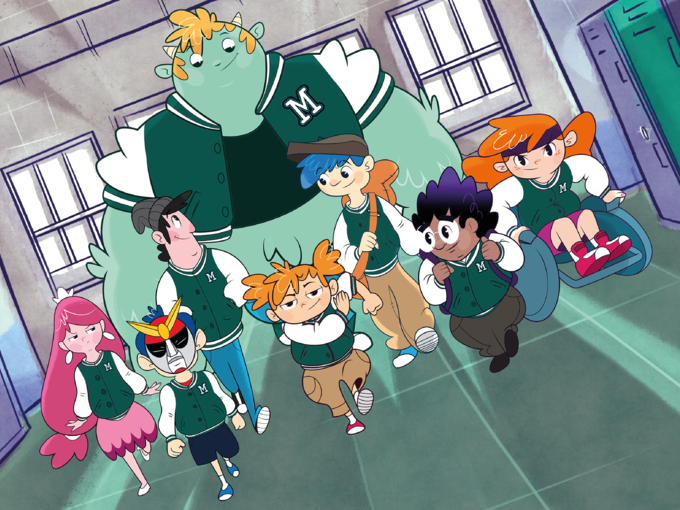 Critters from outer space nab the attention of distributors while an Australian preschool dino tale with a tasty twist heads to the Beeb.

By Andrea Hernandez and Sadhana Bharanidharan

With Cartoon Forum and Brand Licensing Europe a week away and MIPCOM coming up in October, an array of deals for co-pros and sales rights kick off a busy fall season.

Finnish animation studio Ferly has closed several licensing deals to expand its Momolu kids franchise into new markets and categories.The company has appointed Brands With Influence as licensing agent for its brand in the UK, and will now seek partners to expand Momolu into new lines of personalized products, games and music. Ferly has also partnered with Finland’s Goodio Chocolate to develop health food products based on the Momolu & Friends (78 x seven minutes) preschool series about a panda who sings, dances and plays games. Additional licensing deals also include audiobooks with Swedish eBook subscription service Storytel and stationery and school supplies with Finnish brand Karto.

The BBC has picked up Studio 100 Media’s preschool series Vegesaurs to launch on CBeebies and BBC iPlayer later this year. Produced by Australian prodco Cheeky Little Media in association with the Australian Broadcasting Company (ABC), the CG-animated series (20 x five minutes) follows the adventures of a group of vegetable-shaped dinosaurs and focuses on the value of sharing and friendship. The show originally premiered in May of this year in Australia on ABC Kids and ABC iview.

The distributor has signed on to take Kung Fu Pork Choppers to markets beyond China, where it already airs on more than 100 channels including CCTV and Kaku. The co-pro from China-based Winsing and New York-based CraneKahn tells the story of a group of pigs and their super-powered pets in outer space. London-based Jetpack has picked up two seasons (52 x 11 minutes) of the show, which targets four to eights.

The London-based distributor has secured international rights to 2D-animated series My Brother The Monster (pictured), which will be pitched at MIPCOM. The co-pro from Canada’s Arcana Studios and Mexican prodco Gasolina Studios is aimed at kids ages six to eight. The 26 x 11-minute series follows a young girl whose “brother” is actually a size-shifting furball who crashed into Earth from space.

The upcoming series Olga Da Polga, commissioned in July by the BBC, has landed a distributor. UK-based Beyond Rights has picked up the 13 x 11-minute preschool series from Scotland’s Maramedia, which is based on the Michael Bond books about a chatty guinea pig. Also joining Beyond Rights’ roster are two live actioners: Dot To Dot’s arts and crafts series Makeaway Takeaway (23 x 30 minutes) and Beyond Productions North’s Wow That’s Amazing (30 x 15 minutes), which features STEM-based puzzles and experiments.

Random House Children’s Books has signed six new licensing deals for the Richard Scarry franchise. The new partners are Bioworld (apparel and accessories), Clarkson Potter (stationery and baby books), Small Planet (apparel, accessories and housewares), Uniqlo (baby onesies), Super 7 (vinyl figurines) and Hatley (raincoats, umbrellas and clothing line). In addition, the CP will be complemented by new books, such as the Cars and Trucks book, which will go on sale in May 2023.