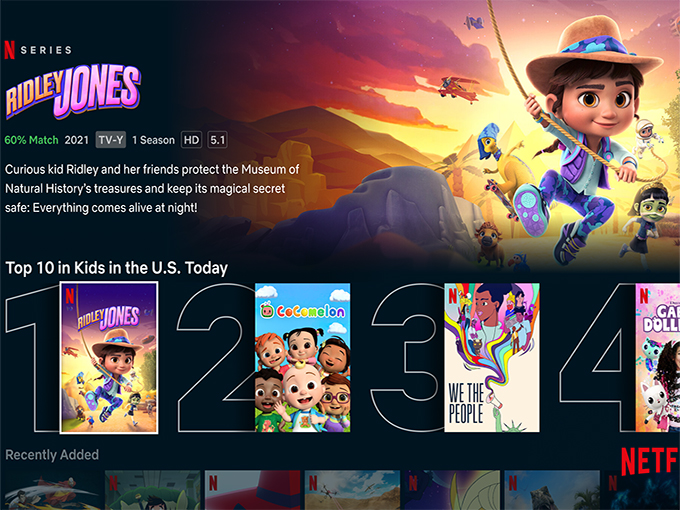 Producers and viewers will now be able to see when a kids show is one of the most-watched in a specific country each day.

It’s been one year since Netflix introduced a top-10 feature as a part of its user interface, and now the SVOD is rolling out a kid-specific version.

Launching today in 93 countries, the Kids Top 10 will showcase the most popular children’s titles in each country, updated daily. The algorithm that determines the list will only pull from content that is rated PG or tamer, taking into account the equivalent ratings systems in each country.

Content that makes the cut will be branded with a “Top 10″ badge, as well as appearing in a dedicated row and on the New & Popular tab on the Netflix kids homepage.

While kids content occasionally makes the cut for the broader Top 10 feature, it’s been dominated to date by more adult-focused programming along the lines of Too Hot To Handle, Sex/Life and IT Chapter Two.

Netflix is also launching a parent-focused recap email that will provide insight into what kids are watching, as well as tailored content designed to foster family engagement, such as co-viewing recommendations and printable coloring sheets and activities.

In other Netflix news, the SVOD and Universal have extended their animated film output deal in the US. The multi-year agreement will see all of Universal’s animated features head to the streamer following Peacock’s initial four-month exclusive window. Upcoming 2022 titles from the studio include Minions: The Rise of Gru, DreamWorks Animation’s The Bad Guys and Puss in Boots: The Last Wish.

Pictured above is an example of the Kids Top 10, not an actual list.