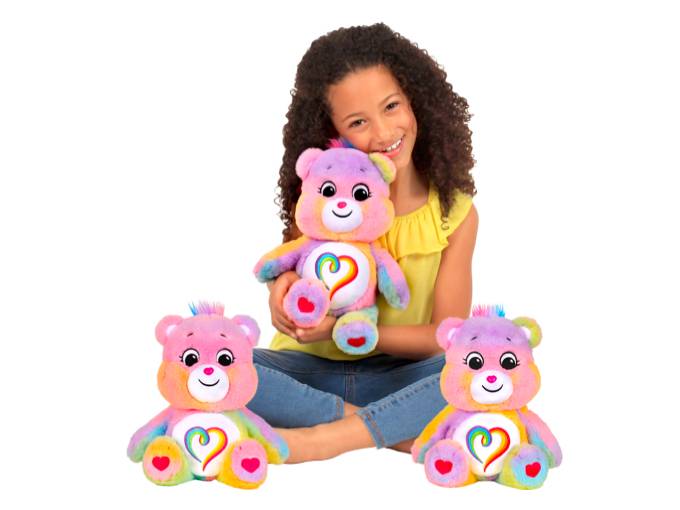 Cloudco Entertainment and Basic Fun! are teaming up to launch the newest Care Bear. Togetherness Bear will appear in upcoming YouTube content, as well as inspiring several new consumer products, starting with a plush offering from the toymaker. This focus on digital content was designed to get the character out to market as quickly as possible, and then ongoing product launches will make her a permanent part of the brand’s CP program.

Togetherness Bear is designed to personify inclusion—her heart-shaped belly features all the colors of the rainbow, and each plush bear’s multi-colored fur pattern is unique so that, just like people, no two bears are exactly the same. Cloudco started to plan this rollout last spring, says VP of marketing Kristeen Tibbets.

“In the thick of all things COVID-related, the idea of a brand-new Care Bear bringing people together felt very timely,” she says.

From conception to consumer products hitting shelves, the development of the character took a full year. And Cloudco’s partnership with Basic Fun! informed not just the plush product, but upcoming content as well, says Tibbets. The character biography and storyline ideas that Cloudco shared with the toymaker during the creation of the plush and its packaging are now being used as a foundation for upcoming videos.

And while Togetherness Bear will be integrated into other YouTube content moving forward, there are currently no plans for her to appear on the TV series,

“We had the opportunity to be reactive and quickly incorporate her into the YouTube series, compared to the lead times required for anything that’s going to be broadcast,” Tibbets says. “It’s a strategic decision to play with content and themes on YouTube, given that there are so many issues you can address in a kid-friendly way [much more immediately].”

In addition to being able to react more quickly through online content, Tibbets says the varied nature of Cloudco’s YouTube series—which includes music videos, shorts and clip compilations—gives the team more freedom to tackle timely or sensitive topics than is possible in the more structured television format.

Shortly after Togetherness Bear hits screens, she will also land on shelves. The plush from Basic Fun! is set to launch exclusively at Walmart in June, retailing for US$12.88 and targeting kids ages four and up.

There are plans to expand the character into additional consumer product categories, says Tibbets, and upcoming agreements with retailers like Hot Topic and Spencer’s will integrate Togetherness Bear into the broader Care Bears licensing program in the summer.

Beyond inclusion, Cloudco is focusing on other timely themes including mindfulness, which is at the heart of its new Care Bears-inspired entertainment center in Shanghai.

The company (called American Greetings at the time) launched Care Bears in 1982, and rebooted the brand in 2018 with 2D-animated series Care Bears: Unlock the Magic.