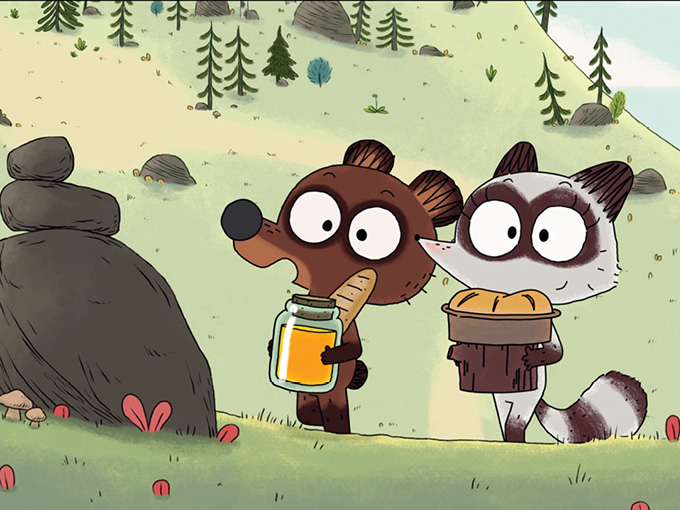 France Télévisions dons some armor and adopts a traveling bear, Arcana boards an alien tale, Gutsy gets some new investors, and Cartoon Network bugs out.

Bulls Holding and Moomin Characters have each taken a minority stake in Finnish studio Gutsy Animations. Moomin Characters is owned by the Jansson family, which manages the licensing rights to Tove Jansson’s popular IP. Moomin and Gutsy have worked closely in the past on the studio’s flagship series Moominvalley. Bulls, meanwhile, is a holding company that operates Rights and Brands, as well as Bulls Press. The investment comes as Gutsy expands its slate with new 2D-animated and live-action series, including upcoming festive spinoff series The Woodies of Moominvalley. Terms of the acquisition were not disclosed.

Pompon Little Bear (pictured) is taking a detour through Europe. The show’s Paris-based distributor Dandelooo has inked a number of pre-sales with European broadcasters including SVT (Sweden), YLE (Finland), SFR and RTS (Switzerland) and TV5 Monde. Originally commissioned by France Télévisions, the 39 x seven-minute preschool series follows along with a precocious bear who allows detours to guide his day. The 2D-animated show is based on a picture book from author/illustrator Benjamin Chaud.

European broadcasters SuperRTL (Germany) and France Télévisions have joined forces to bring a new teenage heroine to screen next fall. TeamTO’s action/comedy Jade Armor tells the tale of a young girl who stumbles into heroic antics when she accidentally dons a magical suit of armor. The animated show was first conceptualized with a male lead, but then was recast with a modern girl at the helm. The 26 x 22-minute series is in production, and features an all-female production team, including executive producer Corinne Kouper (Mighty Mike), showrunner Chloé Miller (Angelo Rules), head writer MJ Offen (WellieWishers) and co-developer Mary Bredin (True and the Rainbow Kingdom).

WarnerMedia’s Cartoon Network Japan has picked up the rights to Malaysia-based Lil Critter Workshop’s non-dialogue slapstick series Buck & Buddy. The 60 x five-minute animated show buzzes along with a pair of bugs just trying to get by. It will air on CN in the region at the end of 2020. Earlier this year, CITV (UK) and Discovery Kids (MENA) picked up and premiered Buck & Buddy, which is distributed by Jetpack Distribution.

German distributor ZDF Enterprises has sent a number of kids series traveling across Asia. The first two seasons of Heirs of the Night, which tracks a brood of vampires looking to take out Dracula, is heading to free-to-air channel GMA (Philippines), along with the first three seasons of Mako Mermaids, which follows the exploits of a young boy turned into a mermaid. Heirs is also headed to Net Mediatama (Indonesia), which picked up the first season of The Worst Witch, too. Detective twins Lexi and Lottie and farm girl Henrietta landed on Good TV (Taiwan and the Philippines), while Hong Kong broadcaster RTHK picked up free-to-air rights to Henrietta, as well as The Adventures of Young Marco Polo.

My Brother The Monster is coming in for a landing. The animated series from Mexico’s Gasolina Studios has received equity investments from the Mexican Institute of Cinematography and Canadian prodco Arcana Studios. Arcana will co-produce the 26 x 11-minute show, which targets kids six to eight, and takes an out-of-this-world twist on familial relationships when a furry alien is adopted by a family after crash-landing on earth. The “slice of life” comedy tackles the topics of resilience, friendship and inclusion, and it’s slated for release in 2022.