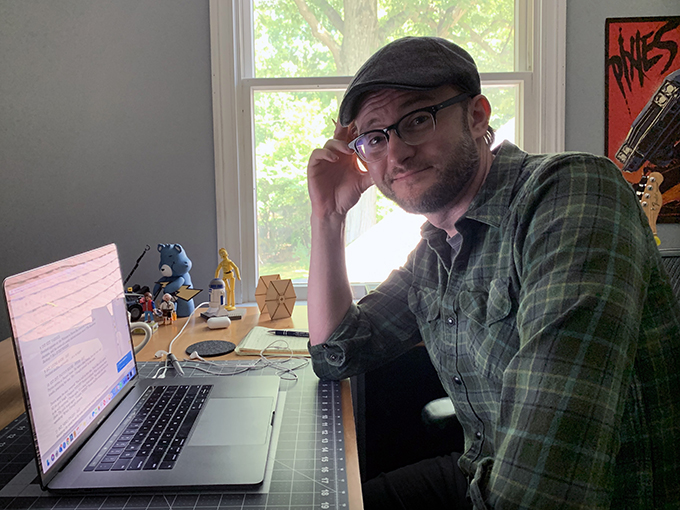 While Cloudco's head of development and production Ryan Wiesbrock has been working on several new series, he misses the spontaneity of in-person collaboration.

Business has irrevocably changed since COVID-19 swept the globe. In the kids industry, one of the biggest fallouts has been the shift away from in-person market gatherings, where deals get signed, programs get greenlit, and peers connect and catch up. Kidscreen checks in with execs at some kids production and distribution companies to see what they’ve been up to in this unprecedented time.

Today, we’re catching up with Ryan Wiesbrock, head of development and production at Cloudco. Keep your eyes peeled for 9 Story’s Natalie Osborne next.

Kidscreen: What do you miss most about doing business before COVID-19?

Ryan Wiesbrock: The in-person, human interaction—it’s harder to have spontaneous collaboration and cross-pollination when most (if not all) interactions now have to be scheduled. I also miss having a printer that worked most of the time.

KS: What have you missed least about going into an office?

RW: I’ve not missed my commute. It’s not horrible, but nothing beats just walking up a few stairs to the office. I’ve also not missed forgetting things. I always seem to leave something at home that I need at the office, or vice versa.

KS: What has your primary focus been since going into lockdown?

RW: Our animated series Boy Girl Dog Cat Mouse Cheese just finished delivering season one, and it’s been exciting to have it finally on air and see it finding an audience. It’s consistently been in the top-five on the BBC and [is] number-one on Gulli since [its premiere].  We’ve been working on scripts for the second season for a few months.

I’ve also been working with our partners at Marblemedia on scripts and pre-production for a new live-action comedy series we expect to announce soon, as well as developing a couple new primetime animated series.

KS: How did COVID-19 change projects you were working on?

RW: We have a few live-action series that were supposed to shoot this spring and summer, which have been pushed. While we’re delayed in shooting, we’ve been able to push ahead on writing scripts for each. We’ve had to hold virtual writer’s rooms, which have been effective and fruitful…but nothing beats the real thing.

KS: Have there been any positive changes to your business as a result of doing business in lockdown?

RW: We have definitely saved costs on travel and expenses. And it’s been a lot easier to connect with most people quickly, rather than waiting for the next market. Perhaps this experience will show that progress can be made without always physically meeting. At the same time, it reinforces the situations where it is needed. Pitching, for example, seems to work best in person because you can read body language, wave your hands around, use visual aids and recognize when your jokes aren’t landing, much more easily.

KS: What in-person event will you miss the most this year?

RW: Our live-action series Holly Hobbie was nominated for a Daytime Emmy and a number of Canadian Screen Awards (CSAs), so I was sad to miss those. Many of the cast and crew were able to “Zoom-watch” the CSAs together, which was fun when we won for Best Children’s Fiction Series and Best Directing. I wish we had been able to celebrate that together, though.

KS: Have you picked up any hobbies in lockdown?

RW: Other than disinfecting my groceries…I’ve continued tinkering and refurbishing old electric guitars. I’m also about to dive into rebuilding an old BMX bike for my son.

This interview has been edited and condensed for clarity and length.