Michael Levine has been of building up his experience and knowledge of educational equity for about three decades. And now, after 12 years driving educational partnerships and company policy at Sesame Workshop as its first chief knowledge officer, the early learning and social policy expert is helping Nickelodeon’s preschool SVOD service Noggin grow its value with kids and families.

Levine—who has a PhD in social policy from Massachusetts-based Brandeis University’s Heller School for Social Policy and Management—is also the founder and CEO of the Joan Ganz Cooney Center nonprofit, which is focused on helping kids learn through digital media. He’s also worked as the VP of the non-profit Asia Society and managed interactive media and educational initiatives to promote knowledge of other world regions and cultures in US public schools.

He’s written policy papers on how parents and government bodies can better increase children’s education and quality of life. One such paper, the 1994 piece “Starting Points: Meeting the Needs of Our Youngest Children,” caught the attention of producer/director Rob Reiner (The Princess Bride, Misery) who then recruited Levine to lead the I am Your Child campaign, which pushed for research into early brain development.

More recently, he’s been weighing in on the screen-time debate: in his view, it’s not just kids’ usage of screens, but how they spend their time, that matters. Video chatting with relatives, eBooks and educational games can be beneficial for preschoolers for example, he says. Levine is now taking all of his experience in studying kids’ learning to grow the platform’s value for kids and families with new content and features.

“I’ve worked with vulnerable kids finding out what they need to know and I’ve worked with the entertainment industry to do R&D about how digital media producers could advance children’s learning potential,” says Levine. “In the past five or six years I’ve been thinking about how to combine legacy brands and new brands together to create a robust education on a digital platform. Other companies have created educational content that’s good for kids, but I intend to make sure Noggin’s is also personalized and joyful.”

The ad-free service already features more than 1,500 full-length library episodes, short-form videos, Spanish-language and music videos from brands such as Peppa Pig and Dora the Explorer. But to differentiate itself from content-driven SVODs, the service is growing its focus on education for kids two and up. To jump-start this shift, Levine will take a leading role in the newly created role of SVP, learning and impact last week.

“We’re going to create a new Noggin,” says Levine. “We’re going to be adding a much more coherent and intentional educational framework with more research-based activities, while keeping it character-led and fitting within the playful learning category.”

Jumping into the new role, Levine is building a curriculum-based team to research early learning.

Motivated by research that digital media platforms like Noggin can bring multiple generations within a family together, Levine plans to start engaging parents with resources and educational content that teaches them how to be better caregivers. The team has also noted the impact stress can have on kids and families, and the platform will add content around wellness and mindfulness to help teach kids about improving their bodies and dealing with anxiety.

Building on its recently launched efforts to grow the platform’s personalization features—which Noggin’s EVP Kristen Kane first told Kidscreen about last month—Noggin will also work on building in features like having characters interact with users, as well as making a dashboard that tracks kids’ educational growth, says Levine. The SVOD service will also look into launching activities and content that can target younger kids and moving into next year Noggin will begin experimenting with books to see how kids engage with them. 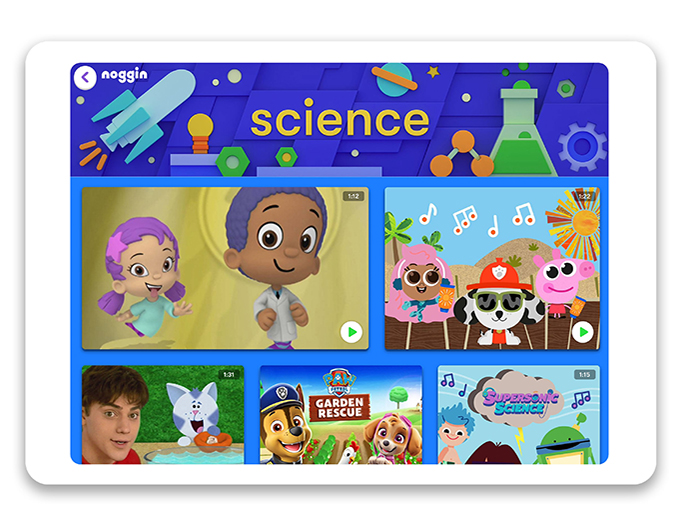 Levine reports to Noggin EVP Kristen Kane, and is focused on growing its value for kids and families with new content and interactive features.

Levine’s hire is the most recent effort the service has made to refresh itself. In May, Viacom reported in its Q2 financial results that Noggin had reached 2.5 million subscribers globally. Prior to its Q2 announcement, the subscription service incorporated more kids education by acquiring early childhood learning tech platform Sparkler and brought on its co-founder Kristen Kane as Noggin’s new EVP in April.

Noggin is looking to build up partnerships to expand the service and the team is going to be attending market events, including Kidscreen Summit, to help bolster its growth, Levine adds.

“We’re looking for content creator partners and also educational partners to help us grow what we hope will be the best in class digital learning platform for kids,” says Levine. “Welcome anyone who wants to refresh an important learning platform to make sure every kid gets a decent start in life.”