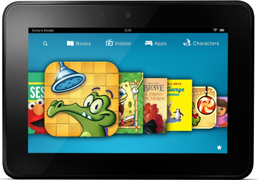 Amazon gets in the spirit with holiday toy list

From STEM to Frozen, see which items the e-tailer predicts will make the biggest waves this holiday season.

In the virtually bottomless pit of products on the Amazon site, a boost in visibility doesn’t hurt, especially for toys. The e-tail giant announced its 2014 holiday toy list today, which featured everything from wearable tech to STEM-related toys—and, of course, Frozen. (The most wished-for toy sold by Amazon over the first three quarters of 2014 was the Disney Frozen Sparkle Elsa Doll.)

Amazon is bringing back its “Amazon Moms Picks,” a shopping filter which was used more often by customers last holiday season than those for price or discounted products. Other categories easily accessible online include wood & recycled, active playtime, retro, STEM, classic brands, innovation, and in the movies.

In addition to Lego and K’Nex, Amazon also pointed out Goldieblox as a big STEM trend in the engineering toys category.

In the innovation section, wearable technology such as the LeapFrog LeapBand and VTech Kidizoom Smartwatch were mentioned alongside some robotic toys like SpinMaster’s Zoomer Dino and MiP, the friendly robot from New York-based WowWee.

Other products featured on Amazon’s holiday toy list include:

Amazon also will offer an array of exclusives, most notably those from the show Fireman Sam. An agreement with HIT Entertainment-owned Mattel brought the popular British franchise to the online retail giant, where the entire preschool series and its consumer products would only be available in the US on Amazon. In addition to Fireman Sam figurines and walkie talkies, others Amazon exclusives this holiday season include:

Despite recent announcements that Amazon is entering the world of brick-and-mortar retail in several cities, the online world is clearly where it stands out. Last year, Amazon sold more than 36 million items worldwide on Cyber Monday alone. During that holiday season, more than half of Amazon’s customers shopped via a mobile device.