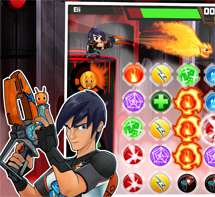 Nerd Corps and licensing agent Discovery Media are bringing the property’s slugs to trading cards and stickers in Italy following a deal with Gedis. The series began airing in the region on K2 in October after its Disney XD debut in February 2013, and the toy line from JAKKS Pacific has been set for a 2014 launch through distributor Giochi Preziosi.

In Latin America, where the brand has been gaining significant traction, Nerd Corps’ agent Compañia Panamericana de Licencias has inked a deal with Panini to bring trading cards and stickers to Brazil, along with stickers in several territories across Latin America.

Nerd Corps’ agent in Russia, Megalicense, has brought Apps Ministry on board to develop and produce a new iOS game for worldwide distribution as well as localize Nerd Corps’ first iOS game, Slug it Out!, for the Russian market. The series debuted in Russia this month on TNT, and toys have already launched through distributor Saks Igrushki.

Istanbul Lisans is repping the brand in Turkey, where two deals have been signed for back-to-school merchandise with Hakan Canta and Keskincolor. Slugterra toys will roll out across the region this fall through distributor Ottonya. The series debuted in Turkey on Disney XD in December 2012 and free TV on Disney Channel this past May.

In Israel, Slugterra launched in July and regional agent Brand Is Real has now secured a deal with Shoshi Zohar for Slugterra costumes and other dress-up products. This follows on the heels of the launch of the Slugterra toy line in August through distributor Ilanit Toys Marketing.

And In South Africa, agent Character Licensing & Marketing has inked a new deal with David Gresham Records to bring Slugterra to home video in time for this holiday season. The first shipment of Slugterra toys arrived at Toys ‘R’ Us and Toy Zone in the region in August and sold out within the first weekend. The series has been a strong performer on Disney XD since its launch in January.

Slugterra toys have also already launched in the US, UK, and more will launch in nine new territories this fall, including Brazil, Chile, Greece, Middle East, Peru, Poland, Russia, Turkey, and Venezuela. The toy line is set for launch in Canada, Croatia, Ecuador and Mexico in 2014 with additional rollouts expected.

Nerd Corps is moving into the next phases of product and promotional strategy and exploring opportunities in categories such as publishing, promotions, trading cards, collectibles, sporting goods, and seasonal. New licensing and promotional opportunities for the recently announced Slugterra TV movie, Ghoul from Beyond, are also expected in 2014.