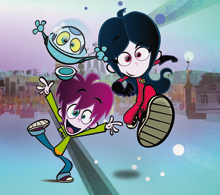 Lucky Fred (52 x 12 minutes), is co-produced with Televisió de Catalunya (Spain) and RAI Fiction (Italy), and follows the adventures of 13-year-old Fred who has a personal robot that can transform into anything he wants.

As a cross-platform IP, Imira launched a Lucky Fred app in February that features a web and mobile-based interactive geo-localised aliens hunt.

In Spain and Portugal, Editorial Planeta (Castilian version) and Grup 62 (Catala version) will release 16 book titles between 2012 and 2014 including eBooks.