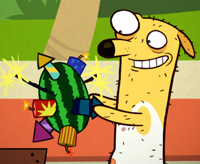 NCircle Entertainment is on board to handle DVD sales this fall in the US, eOne in Canada, Abbey Home Video in the UK and Just4Kids in Holland and Belgium. DVD sales in Australia are currently handled by Village Roadshow.

The 52 x 22-minute series, which features the comedic misadventures of a group of underwear-clad animal characters who run a beach-front hotel, is now in its third season and is both produced and distributed by 9 Story.

The property has also recently expanded into gaming with Toronto, Canada-based digital media developer Game Pill set to launch an online game this fall and mobile apps in 2013.