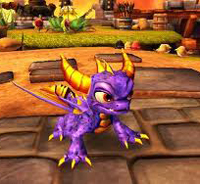 A full licensing program is set to launch later this year and throughout 2013.

The latest deal comes on the heels of Penguin Children’s Books inking a global licensing partnership with Activision for a series of books and apps based on the popular video game and toy line that lets kids bring more than 30 physical toys to life digitally through the game’s portal of power.

Noise for the brand is also growing with the release of the game’s sequel, Skylanders Giants, expected later this year.