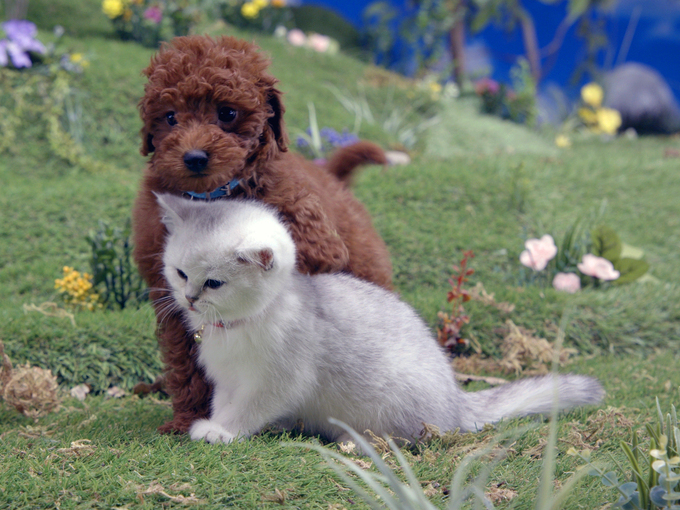 Inside the pockets of Mittens & Pants

Guinea pigs delivering the mail? A tortoise driving a fire truck? A rabbit who manages his own carrot farm? Welcome to Kibble Corners, a colorful and tight-knit town where animals live just like us.

Debuting this fall in Canada (CBC and CBC Gem) and the UK (Sky Kids), new live-action preschool series Mittens & Pants (39 x seven minutes) is built on an overarching theme that can be boiled down to three words: different is good.

Creator Phil McCordic says the idea for the series was a natural progression from two live-action series he previously created: Tumbletown Tales (2004-2011), featuring hamsters; and Zerby Derby (2013-2017), starring remote-controlled cars. Working on these projects honed McCordic’s knack for improvisation and adaptability on set, and got him thinking about what it would be like to produce an entire series featuring live baby animals.

The answer is “magnitudes harder” than you think, says McCordic.

Commissioned as a CBC original, Mittens & Pants pre-sold to Sky Kids in July. The series is being produced by McCordic’s Windy Isle Entertainment prodco (which he co-owns with producer Shereen Ali), with financial support from the Canada Media Fund, Ontario Creates, federal tax credits and the Shaw Rocket Fund.

It’s not just the baby animals performing regular tasks that make the show cute and relatable. Its adorable leads—Mittens, a shy and curious kitten, and Pants, a playful and energetic puppy—are brought to life by child voice actors. In fact, all the residents of Kibble Corners are voiced by kids, which McCordic says was a natural decision made to amplify the cuteness factor and evoke empathy at crucial moments.

Kids also voice “moments of internal reflection” that describe the baby animals feelings, which brings authentic emotion to the scenes, says McCordic, adding that sad puppy dog eyes are also very effective. The friendship between the characters and the strength of the Kibble Corners community forms the heart of the series. And although storylines were prepared for every episode, the crew embraced the spontaneity of animals too young to be trained. The protagonists, for example, are played by puppies and kittens that are only eight weeks old. “We wrote and approved scripts knowing full well that they could change entirely,” McCordic says. Dialogues were written after filming and editing, and typically shaped around how the animals behaved in the footage. “We just used what [the animals] did, rather than what we wanted them to do.”

This approach helped inject impromptu comedy highlights into the story. In one scene, for example, a piglet is being interviewed by a guinea pig reporter. The only problem? During shooting, the piglet kept shying away from the reporter’s camera, constantly turning her back on it. But instead of changing the scene, McCordic’s team decided to use the footage to create a deliberately funny moment. In the final cut, the piglet keeps talking while looking away and ignoring the requests from the reporter to turn around.

Toronto Animal Wranglers handled the animals on set, with production overseen by Movie Animals Protected (MAP), a Canadian non-profit org. The puppies and kittens were switched out as they grew during production, and all were adopted after filming wrapped.

Vancouver-based Thunderbird Distribution came on board in July to distribute the series and manage global consumer products rights. Richard Goldsmith, president of global distribution and consumer products at parentco Thunderbird Entertainment, says he was attracted by the show’s unique and endearing appeal, as well as the golden retail opportunity it represented. “The show checked every box to set a play pattern for kids to re-enact the series in their homes or in their backyards,” he says, noting the animals can be easily translated to toys, while the buildings and vehicles in Kibble Corners would make perfect playsets.

“There’s nothing else quite like it out there,” adds Lucy Murphy, director of kids content at Sky UK and Ireland. “The show really does reflect the life of a preschooler who, just like these animals, is exploring their world where everything they encounter is new. They’re really learning about helping their friends and living together as a community.”

Drew Mullin, executive in charge of production for children’s content at CBC, agrees and says that the show achieves relatability through the abstraction of animals.

In one of the more complex aspects of the series’ narrative, viewers learn that Pants the puppy is the adopted child of two bunnies. While the happy-go-lucky pup is aware and accepting of his situation, he also has moments where he reflects on the nuances of his identity. For instance, Pants attends a puppy party where he confronts his self doubt about whether he is “puppy enough,” given that his large extended family—parents, uncles, aunts and 35 cousins—are all bunnies.

“Even though on the surface it’s baby animals running around, we’re always making sure there is relevant storytelling that would be meaningful to our audience and have a bit of wisdom,” says Mullin. However, the animals are not intended to evoke human equivalents, says McCordic. “We are never directly saying that this species of animals represents this group of people.”

Sky Kids’ Murphy adds that the best shows incorporate curriculum content seamlessly and invisibly. “Children are learning about life and about celebrating differences, but in a really authentic and endearing way.”