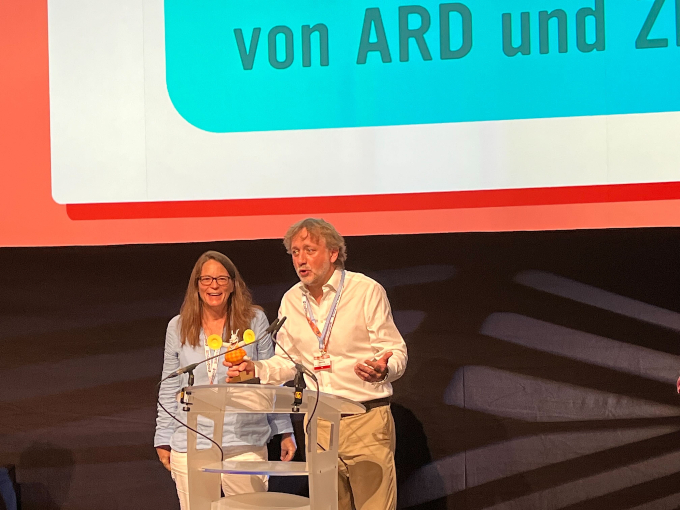 Broadcaster of the Year went to Germany’s KiKA, and head of international content, acquisitions and co-productions Sebastien Debertin said in an emotional acceptance speech: “Thank you to the producers; your success is our success.”

He told Kidscreen that he didn’t think KiKA had much of a chance against a French broadcaster with a home-field advantage, so he was all the more thrilled about the win. “It’s unexpected, and that makes it more of an honor.” KiKA was up against TF1 Unité Jeunesse (France), RTVS (Slovakia)  and adult-skewing streaming service GLITCH in the category.

Barcelona-based Goldbee took home Investor/Distributor of the Year for its success in distributing more than 2,500 half hours of programming, including animated series Ziggy and the Zootram and Cleo & Cuquin. Also nominated were DR Sales (Denmark), KidsMe (Italy) and Nathan Univers Jeunesse (France).

And Spain’s Peekaboo Animation won Producer of the Year for its work on I, Elvis Riboldi and My Little Heroes. The studio also pitched a new series concept called Best Friends Forever…Stranded! at Cartoon Forum this week. Joining Peekaboo on the shortlist were France’s Normaal and Watch Next Media and Poland’s Letko.

Winners of the 2022 Cartoon Tributes awards were determined by vote among the Forum’s 1,000 participants, a group that is usually dominated by French companies.

Spain’s ascension in the global animation industry was highlighted at this year’s Cartoon Forum. This year alone in the region, eight animated feature films and six animated series are expected to launch, and more than 50 projects are currently in production. Most of these (70%) are collaborations with European and Latin American partners that tap into Spain’s 30-plus international co-production treaties. And there are now close to 300 animation and VFX companies operating in Spain, according to ICEX Spain Trade & Investment.