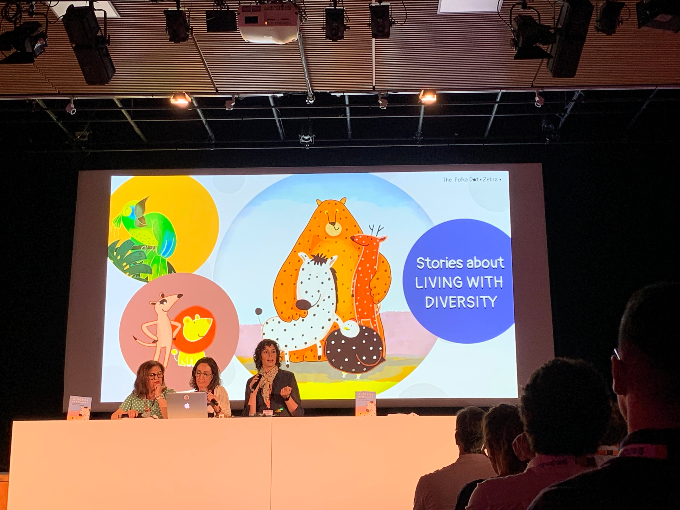 Cartoon Forum heads into the wild

With the second day of the pitchfest coming to an end, many European co-pros ventured into the wilderness, with social and educational themes to guide them.

Day two of Cartoon Forum was alive with the sound of prodcos scouting animal habitats as locations for their next projects.

The morning kicked off with a pitch for Polka Dot Zebra, a co-pro from Spain’s Sygnatia and Portugal’s Bro Cinema aimed at upper preschoolers. It follows a polka-dotted zebra who learns to embrace what makes her unique, thanks to her found family. The 2D-animated series is an adaptation of A Zebra de Bolinhas, a book penned by Ana Paula Catarino and Hele­na Perim.

“Children in this age group seem to connect with animals and their adventures more than [other human beings] sometimes,” Catarino tells Kidscreen, noting that diversity is an important yet tricky subject to get right. “You have to be subtle,” she says, explaining that the series uses characters like a slow cheetah and a color-blind chameleon to illustrate the fun in being different.

Director Bénédicte Galup and producer Jérôme Duc-Maugé pitched Gouti’s Great Journey, a 26-minute preschool film that follows along as a family of rodents travels into new ecosystems and learns about each one’s native animals and seasons. The artistic style of this 2D-animated musical film is intentionally bold and colorful, seeking to depict the fantastical elements of flora and fauna, says Galup. For instance, one scene features ice-sculpture palm trees and dancing fleas when a character who has never seen the Arctic attempts to visualize it.

On the marine end of the wildlife spectrum, pitches included series like Aquaworld (52 x 10 minutes) and The Last Whale Singer (26 x 11 minutes). Both projects for the six to nine demo blend comedy and adventure with a larger message about environmental awareness.

Whale producers including Telescope Animation’s Maitr Woköck (Germany) and Big Bad Boo’s Shab­nam Rezaei (Canada) took the stage to pitch the series about a teenage whale with the power to sing and heal the oceans. “Our oceans are in dire need of healing. With this series, we want to help kids and families understand how beautiful and precious our marine world is,” said writer and director Reza Memari in a virtual message delivered to the audience.

Speaking to Kidscreen afterward, Woköck echoed this sentiment and explained the long-term goal: “​​We want to make kids aware [of ecological damage], but also make them aware that they can do something about it.”

Delù from the Jungle—a collaboration between Italy’s Ani­mo­ka Studios and France’s Nalu Ani­ma­tion—was among the final pitches of the day, centering on a five-year-old girl who has been raised by monkeys in the jungle. The 26 x 13-minute series explores what happens when she and her animal friends decide to go out and get a taste of city life.