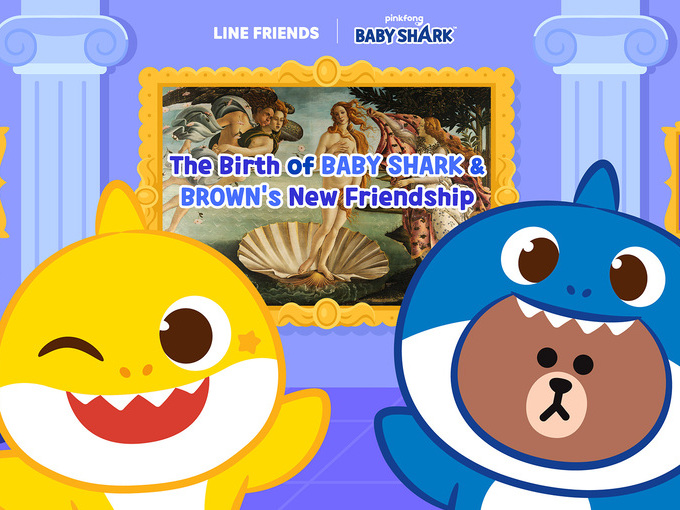 A new six-part YouTube series featuring both South Korean IPs shows how PinkFong is aiming to take its edutainment mandate beyond numbers and letters.

The popular shark and emoji characters—owned by The Pinkfong Company and IPX, respectively—are teaming up for Night at the Art Museum, a new 2D-animated YouTube series about famous art from around the world.

“Night at the Art Museum is designed to help kids and families improve their creativity and stimulate their imagination through world-renowned paintings,” says Pinkfong co-founder and EVP Ryan Lee. The series finds characters Baby Shark, Brown and Sally transported into a world with artworks on display. Each of the six episodes sees them learn about a specific painting, starting with The Birth of Venus, the Early Renaissance painting by Italian artist Sandro Botticelli (pictured).

The brand is seeking to move beyond the well-tread topics of science and math to talk about art and help kids develop an aesthetic sensibility, says Lee. “We strive to inspire our fans through diverse topics across every field, including languages, science, math—and, of course art,” he says. The richness and history of classical art can help kids develop appreciation and preferences at a young age, he notes, which makes it an ideal subject for the new series.

Both based in South Korea, Pinkfong and IPX are also partnering on consumer products based on the series. The companies will jointly produce a branded range in categories such as apparel, stationery and bath products. Release dates for these products haven’t been set yet, but the program will launch online and in brick-and-mortar Line Friends stores across Asia and North America.

IPX’s Line Friends brand originated in 2011 as emojis for the Asian messaging app LINE. The company launched Line Friends NFTs in July and is also developing an upcoming CG-animated series for Netflix.

Night at the Art Museum will debut on Pinkfong and Line Friends’ YouTube channels on September 14, with a new episode dropping each month.