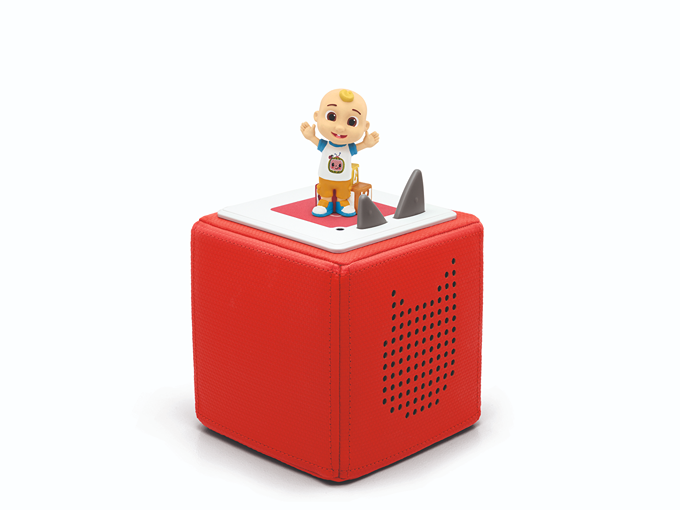 The British toyco is developing a new range of playthings for its Toniebox audio system based on Moonbug's preschool IPs, and it's starting with CoComelon.

On the heels of inking deals with Disney, Universal and Hasbro, interactive toy manufacturer tonies is building out its licensed portfolio with more preschool properties, courtesy of Moonbug Entertainment.

The two companies have partnered up to launch a CoComelon sing-along toy for the Toniebox, a screen-free entertainment device that’s the backbone of tonies’ business. Based on CoComelon’s protagonist JJ, when placed on the audio system, the toy plays 20 original and classic jingles from the show, including “Wheels on the Bus” and “Playdate with Cody.”

The CoComelon Tonie launched through the toyco’s online store on September 7 for US$14.99 and will hit shelves at Target locations in the US and UK next month. More toys featuring characters from Moonbug’s other preschool brands are slated to roll out in 2023.

In July, tonies released its first wave of interactive toys based on stories from British author Roald Dahl, including Matilda, James and the Giant Peach and The Witches. These figures joined a range of more than 600 different licensed and original Tonies the company has produced since launching in 2016.

As parents become more restrictive about screen time, tonies is showing that screen-free entertainment alternatives could be a growing multi-million-dollar toy category. In its 2021 annual report in April, the company posted US$187 million in revenue, up 39.7% from the previous year. To date, the company has sold more than 3.5 million Toniebox systems and upwards of 40 million individual Tonies figures.

CoComelon’s JJ will be appearing in another new medium this fall. CoComelon: Play With JJ from UK-based developer Outright Games will be Moonbug’s first video game. Made for Nintendo’s Switch console, the title will launch on October 28 and feature gameplay with JJ and his friends, musical mini-games and collectible virtual stickers.