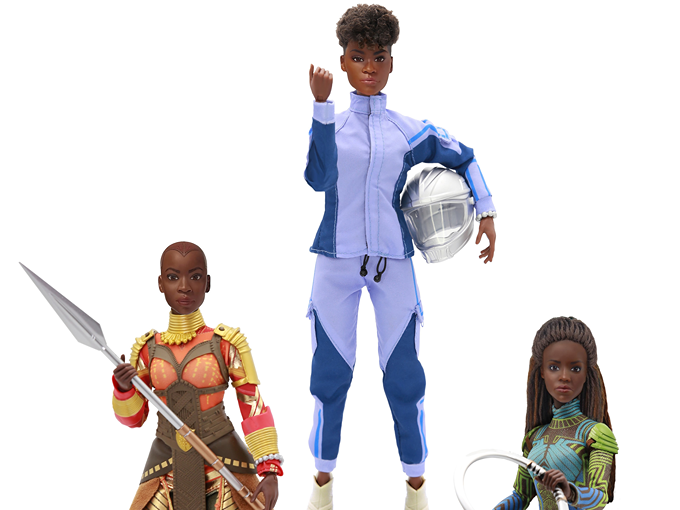 The 11.5-inch dolls are slated to hit retailers ahead of Black Panther: Wakanda Forever's release in October and will replicate the skin tones and hairstyles of the film's characters.

The first Black Panther film in 2018 was a hit both on screen and at retail, generating millions in ticket and product sales globally. And Florida-based toyco World of EPI is betting fans will be excited to reunite with their favorite characters, announcing its first partnership with Marvel to develop a line of dolls based on the upcoming sequel.

Its Fresh Dolls Fierce collection will initially feature female leads Shuri, Okoye and Nakia as 11.5-inch dolls that come with detailed outfits, intricate hairstyles and custom-blended skin tones that authentically replicate the characters as seen in the film.

A first wave of dolls is slated to roll out across North America in Target, Walmart, Amazon and Macy’s stores ahead of the film’s launch in October, and they’ll retail for US$49.99 each. Black Panther: Wakanda Forever is slated to premiere in North American theaters on November 11.

CEO Lisa Williams founded World of EPI in 2003 to create diverse dolls featuring ethnicities including African American, Afro-Latina and Hispanic. The company released its first line of Positively Perfect baby dolls for ages three-plus in 2009, following up in 2017 with a fashion range for older kids called The Fresh Dolls.

In Black Panther: Wakanda Forever, returning characters Shuri, Nakia and Okoye must band together to protect the mythical kingdom of Wakanda from invading forces after the tragic death of its king, T’Challa. The film is directed by Ryan Coogler (Black Panther, Creed), who also co-wrote the screenplay with Joe Robert Cole (American Crime Story, All Day and a Night).

The first film was a monster hit for Disney and Marvel, topping US$1.3 billion at the global box office and breaking a number of ticket sales records.