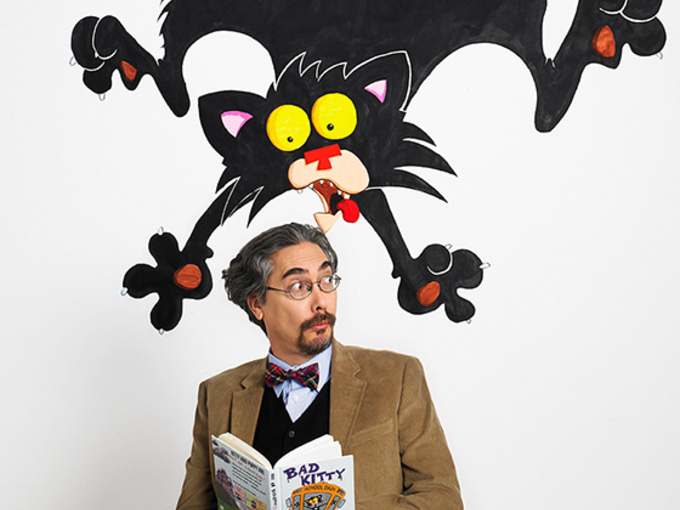 The Canadian studio is developing an animated series based on the 30-title range by Nick Bruel that has sold 20 million copies.

Bad Kitty, a bestselling book series written and illustrated by Nick Bruel, has been optioned by Toronto-based Boat Rocker Media for TV development.

The books star a housecat named Kitty, who is delightfully destructive by nature and often finds herself embroiled in shenanigans with other characters, including her canine playmate Puppy and pet sitter Uncle Murray.

There are 30 titles in the kidlit range, which is published by Mcmillan and Scholastic. More than 20 million copies have been sold since the first book was released in 2005.

Kidscreen spoke to Bruel, who says that he’s a huge fan of the animation genre and that his books were inspired by the “the humor and madcap energy” of old Looney Tunes cartoons.

While his chapter books are for readers ages seven to 10, Brunel has also recently moved the world of Bad Kitty into picture books—which has introduced his main character to a new and younger audience. The next installment in the chapter book line, titled Bad Kitty: Supercat, is scheduled for release at the end of the year.

Working closely with Bob Higgins, EVP of kids and family content, Bruel says he’s enjoying collaborating with an experienced producer like Boat Rocker. “Books and publishing, I understand,” he says. “But animation and streaming media is something I only know about as an audience member—an outsider looking in.”

Bad Kitty marks yet another adaptation for the Canadian studio’s kids and family team. Earlier this year, Boat Rocker teamed up with LA-based prodco The Operating Room for an animated series based on Erik McCurdy’s Stuffed. Reminiscent of Calvin and Hobbes, the comic strip celebrates the power of childhood imagination, following a young girl and her talking plush toys.