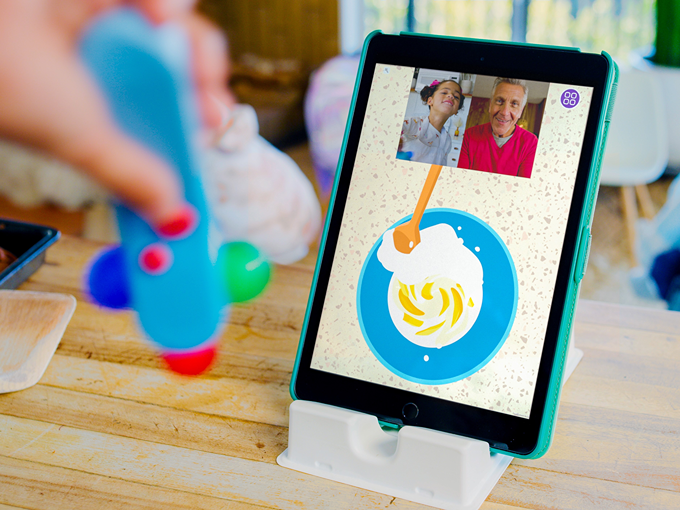 Kinoo aims to strengthen the bonds between children and grandparents through interactive AR experiences teaching early academic and life skills.

Jim Marggraff, whose LeapPad device has taught literacy and math to millions of kids over the last 23 years, has just launched a new video-calling system designed to bridge the distance between far-flung family members and make learning interactive.

Three- to seven-year-olds can use the Kinoo app to video-call relatives and play games together online using an integrated wand controller with motion-sensor technology that lets them interact with the content displayed in front of them. This wand feature differentiates Kinoo from other video-calling platforms like Zoom and Skype, and creates a more engaging experience for kids, says Marggraff.

Kinoo’s gameplay aims to teach kids early academic and life skills such as literacy, numbers and problem-solving. Bundled with a wand, the device is selling in the US on the company’s website for US$99. It comes with 30 days of unlimited video-calling (after which, customers will get one hour a month for free, or they can upgrade to unlimited calls for US$10 a month) and free access to a library of more than 20 original co-play activities developed by the company’s in-house team.

These include baking games and puzzles, as well as titles with social media integration, allowing users to share photos and videos. The company is planning to expand on this initial offering with licensed games and streaming content in the future.

To help parents and caregivers get involved with kids on Kinoo, the app poses conversation-starter questions that both generations can relate to—such as, “What is your favorite dessert?” and “What do you think about pollution as an environmental issue?” It also gives hints to help limit frustration during gameplay.

“We think that creating an interactive space where young children and generations of family members can interact with one another is an emerging trend,” says Marggraff. “While video and social media applications are readily available, Kinoo is meaningful and impactful because it can help develop connections between others through gaming, while also supporting early learning and development.”