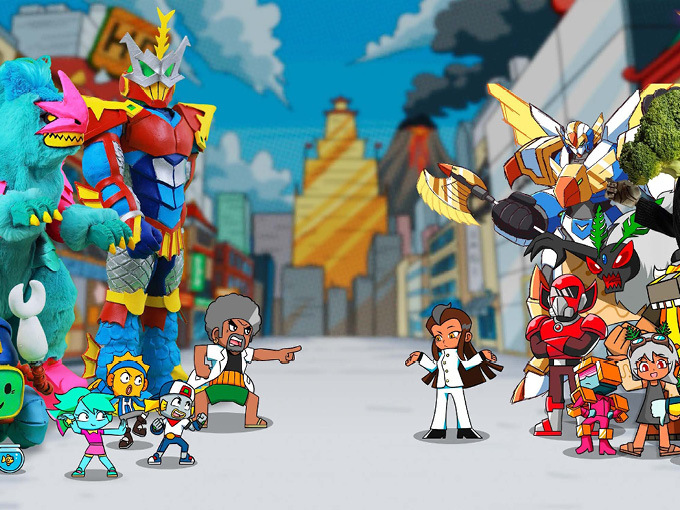 Inside Park Star’s twist on tokusatsu

EXCLUSIVE: Kidscreen's weekend read delves into Ancho-V's world of kaiju-mecha dance battles and how its creator Young Park identified a gap in South Korea's 6-to-11 market.

When Park Star Media founder Young Park was developing the idea for his company’s first original project Ancho-V, his plan was to make the first globally successful South Korean animated series for older kids—a show that could pave the way for more K-Cartoons to reach an international audience, not unlike what BTS and Squid Game have done for the K-Pop and K-Drama genres.

To begin the process, Park identified a gap in the local South Korean market for 2D-animated series targeting kids ages six to 11. Historically, South Korea is best known for CG-animated, toyetic preschool juggernauts, such as Super Wings and Pororo the Little Penguin, which have dominated the local market for years and sold well internationally.

The strength of these types of shows is directly tied to Korea’s lucrative toy industry for preschoolers, according to Park. “With so many preschool shows focused on toy elements [to feed demand from local broadcasters, streamers and retailers], it’s much harder for older-skewing local IPs to sell as many toys, let alone get picked up or even get produced,” says Park.

For Ancho-V to have any kind of advantage in front of Korean and international buyers, it would need a unique look and feel, so Park enlisted the services of Antony Gusscott—creative director at Korean consultancy firm Sprinkles on Top.

Gusscott is helping develop Ancho-V into a 26 x 22-minute action-comedy about a trio of cybernetic fish kids who use their emotions to transform into kaiju (Japanese for giant monsters) and mecha (large armored robots in anime) hybrids. The show’s main message is that it’s okay if you can’t always control everything, including your feelings.

Park and Gusscott’s shared love of popular Japanese tokusatsu properties like Godzilla and Super Sentai (the source material for Power Rangers) was a big influence on the show. Tokusatsu is a Japanese term for live-action films or TV series that use a lot of special effects—often low-budget ones—and sometimes feature actors dressed up as mega-sized monsters or robots that engage in city-destroying battles.

“To our knowledge, there aren’t any shows that have blended tokusatsu with 2D animation, so we wanted to try something entirely fresh with Ancho-V,” says Park.

Along with its tokusatsu influences, Ancho-V will also feature some recognizable Korean elements, including K-Pop dance battles between kaiju and mechas. The decision to inject more tongue-in-cheek moments was made to ensure Park Star maintained a kid-friendly approach to the tokusatsu genre, says Park.

“There can be some apprehension [from kidsnets and parents] because most tokusatsu content features a lot of characters fighting in mega battles between buildings,” he says. “We have a little of that, but we also have the dance battles, plus one of our main characters is a fuzzy, Godzilla-esque kaiju that spews rainbows and arm-wrestles oversized broccoli accountant monsters. These kinds of absurdly random ideas will appeal to kids of all ages.”

Another unique selling point for the project, according to Park, is its use of a fan-focused strategy to build up brand awareness. With help from Brittany Kay Taylor—TikToker, voice actor and founder of Dallas-based animation dubbing studio Saturday Morning TV—Park Star cast amateur voice actors through TikTok for the show’s pilot episode, a move that saved the company money, unlocked a larger pool of diverse talent and grew an early fanbase for Ancho-V.

“We wanted to communicate with potential fans as early as possible so we launched a casting campaign using Taylor’s TikTok platform for voice actors,” says Park. “We felt TikTok was the best place to go since there’s so much talent on the platform and some voice actors, despite being amateurs, have hundreds of thousands of followers.”

If Park Star had gone with a more traditional dubbing agency that wasn’t eyeing amateur TikTok talent, it would have provided only three or four options for each character, says Park. By using TikTok, Saturday Morning received 300 to 400 auditions for the pilot’s main characters and 250 to 300 for its secondary characters, plus the auditions have racked up more than a million views to date. “Because we got so many auditions from all over the world on TikTok, it allowed us to find a more diverse cast,” says Gusscott. “Plus, if we wanted voice talent that worked on big shows, the [agency] rate would be much higher. As a smaller studio, we figured it would be smart to go a route that other studios haven’t really taken.”

So far, the biggest challenge in the development of the series, according to Park, has been getting people to recognize the vision for Ancho-V, especially in Korea where broadcasters haven’t seen something like it before.

Fortunately, the project gained some momentum last December when Park Star and Sprinkles on Top won the grand prize at KOCCA’s annual animation boot camp, the Korean cultural agency’s competitive pitch contest for Korean studios and their upcoming shows in development. While there was no monetary prize awarded to the studio in round one, Park Star and Sprinkles on Top got a boost to their awareness and credibility going into the upcoming second round of the boot camp, where they will compete to win US$80,000 for animating the pilot episode.

“The judges appreciated the show’s relatable storytelling and how the kaiju transformations are used as a metaphor for the kids’ hormonal transformations of adolescence,” says Gusscott. “Our mixed-media element also introduced a fresh spin to the mix.”

Park Star currently has a completed trailer and a dubbed animatic and script for Ancho-V‘s pilot episode. Its goal is to fully animate the pilot by the end of the year and look for co-production, broadcaster, writing and toy partners.

“If you’re in the toy, animation or broadcasting sectors and want a diverse series that’s totally off the hook, PM us,” says Park. “We’re also looking for a diverse group of writers from anywhere in the world who enjoy the same types of shows that Ancho-V is inspired by. We believe in the project and will keep developing it until we’re joined by others to make the dream real.”