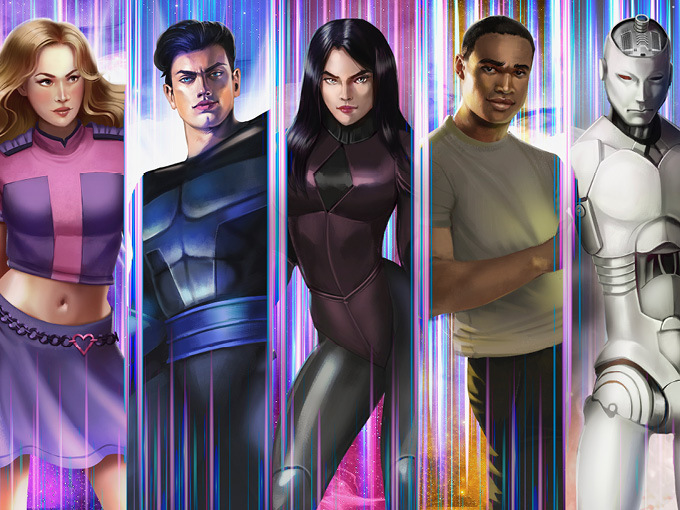 The company has been planning to create a larger world for Tara Tremendous since first launching the audio series in 2015 during the early days of the podcast boom, says Wonkybot co-founder Stewart St. John.

The success of a 2017 Tara Tremendous live musical stage show was the first indicator that the IP could evolve. “That was the moment when we saw the content could work on multiple platforms,” says St. John. But as the podcast market grew and became more saturated with content and podcast networks, the team decided in early 2021 that launching a Wonkybot channel with Apple Podcasts would be a good sustainability strategy. “We knew that if we started building the brand, we could not only grow the audience for Tara, but for other characters in her universe, too,” he says. “But it meant we needed to have more content to attract subscribers.”

The first episode of the new Tara season and the premiere miniseries of Tremendous Boy will both drop March 11 on Wonkybot’s website, the Wonkybot Channel on Apple Podcasts, and other major podcast platforms including Spotify and iheartradio.

Season four will once again revolve around Tara Callahan (a.k.a. Tara Tremendous), an ordinary 14-year-old who accidentally gains the powers of every superhero in the world. This time around, Tara’s friends, family and teachers embark on a mission to rescue her from an alien empress who wants to use Tara’s powers to reclaim her fallen galactic kingdom.

Tremendous Boy revolves around a mysterious 18-year-old with incredible powers who hails from an alternate, dystopian universe and is torn between the forces of good and evil as he serves a dark lord. It will launch on March 11 as a five-part, short-form miniseries. Following this premiere, Tremendous Boy will appear in a multi-part story arc of Tara Tremendous before returning to his own podcast in a full-length, eight-episode season towards the end of this summer.

Meanwhile, Master Machine features an African-American superhero who can shift his DNA into any machine to take it over. This podcast is expected to launch this summer and will be the first audio series featuring a Black superhero as a lead in a standalone show, according to St. John. “Being bi-racial in a multicultural family, I saw a need to represent the spinoff with an African-American lead,” he says. “I felt it would be important for kids and families to experience the character.”

In another nod to Marvel, Wonkybot has cast Linda Gray (Dallas) in the new season of Tara as a mysterious character who will tie the whole “Tremendous Universe” together. “It’s much like how Samuel L. Jackson is at the center of the MCU as Nick Fury,” says St. John.

Gray will also voice the character’s doppelgänger from a parallel universe in the premiere miniseries of Tremendous Boy. “Linda brings worldwide recognition to the brand—especially to the parents and grandparents who are discovering that our immersive, cinematic podcasts aren’t just for kids, but sound, feel and play more like Marvel movies for the whole family,” says St. John.

St. John says Tara Tremendous is currently in the top 1% of all podcasts, based on number of downloads for new episodes within the first 30 days. “We are not Serial by any means, but we are moving in that direction,” he says.

As for further brand expansion, a previously announced live-action musical feature film is in development, and Wonkybot is currently in talks with YouTube and Nickelodeon sensation JoJo Siwa (The J Team) to star as an aged-up 17-year-old Tara. “Her agent at CAA loved the script and the project for her,” says St. John. “We think it would be a great match.”

The film project is currently being overseen by Katie McNicol, head of development at Marc Platt Productions (La La Land, Wicked). Though Wonkybot doesn’t have a studio attached yet, St. John says Marc Platt has a first-look deal with Universal, which could end up producing and distributing the feature once a lead is cast.

This isn’t the first screen adaptation for the brand. Web series The Secret Diaries of Tara Tremendous launched in 2017 with six episodes that were very musically-driven. But they were pulled from the market when the company decided to focus on turning the brand into an action-adventure podcast series, says St. John.

In deciding to develop a movie before a TV show, St. John was inspired by what Marvel did with the MCU. “The model we have is a microcosm version similar to the MCU in that we control all of our content,” he says. “I saw making a movie, either as a Netflix film or traditional theatrical release, as a great next step for Tara. And it being a musical feature would separate it from the glut of Marvel movies that dominate screens.”

Looking ahead, Wonkybot is ready to start developing a non-musical animated or live-action Tara Tremendous series for television. “I think it would be a great Netflix series,” says St. John. He’s also working on a Tara Tremendous book that Wonkybot will either shop or self-publish. “Our audience is so strong that we have developed the ability to self-publish a book if we want to,” he says. “That’s what’s exciting about where we are right now.”