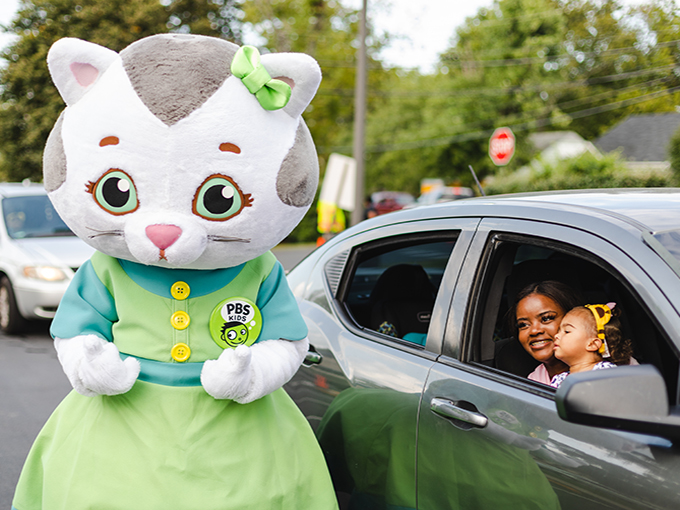 How kidcos are preparing for a live event renaissance

IP owners are gearing up for a return to live and location-based brand extensions as the world begins to look at life beyond pandemic restrictions.

Whether it’s watching a live show in a theater or walking onto a ride at a theme park, location-based brand extensions are some of the most immersive ways for fans to engage with properties. According to California-based market research firm Grand View Research, the location-based entertainment market was valued at US$3.05 billion in 2020.

And now, after so many months stuck at home during the pandemic, there is something especially magical about families gathering together again to experience their favorite brands.

For experiential companies, the last two years have led to significant learnings and the launch of many new strategies to adapt live entertainment offerings during an ongoing pandemic.

And while new COVID-19 variants warrant continued caution, brand owners and event producers have transformed their plans for 2022 in order to deliver new and improved experiences for kids of all ages.

For Pennsylvania-based Fred Rogers Productions, maintaining live and location-based brand extensions in recent months was all about giving kids their space. The team executed drive-through events that required families to remain in their vehicles, and organized storytimes that saw costumed characters sit apart from kids in order to comply with social distancing man- dates. The Daniel Tiger costume was even outfitted with a mask to encourage younger children to keep their own face coverings on during events.

The company also used this strategy for its collaborations with partners like the Pittsburgh Downtown Partnership. Pre-COVID, its Holiday KidsPlay event was hosted in a large heated tent; but in 2021, it was reorganized to be completely outside, with a focus on the new Selfie Garden.

The garden was styled with backdrops from series like Daniel Tiger’s Neighborhood and Donkey Hodie. Instead of costumed characters, the space was filled with cutouts of fan-favorite characters in winter finery. Children were able to immerse themselves in the worlds of their favorite shows without coming into close contact with anyone outside of their family bubble.

“It was something short-term that we could adjust quickly to still bring excitement to our audience, while keeping them safe,” says Matt Shiels, VP of business and legal affairs for Fred Rogers Productions. And while this distancing strategy was initially employed as an immediate solution to the problems presented by the pandemic, the company’s upcoming initiatives will continue to feature built-in distancing mechanisms.

Looking into 2022 and beyond, Fred Rogers is focused on partnerships to grow its live and location-based portfolio. Museums are of particular interest since their commitment to education aligns with the prodco’s own mission, and the team is planning more museum stops in 2022 than it made in either 2020 or 2021. Fred Rogers has an ongoing relationship with the Children’s Museum of Pittsburgh, for example, which will drive the Daniel Tiger’s Neighborhood: Grr-iffic Exhibit to keep touring throughout this year.

“We are hoping to do more with museums in the next few years, and these experiences will take place outdoors if possible,” says Suzanne Masri, VP of marketing, communications and engagement for Fred Rogers. “They’ll have a larger footprint, giving more space between activities. Where it’s maybe been more compact in the past, now we’re encouraging partners to set things up in a location where there’s a lot more room for the events.”

Museums also benefit from timed ticketing, which helps control the size of crowds without sacrificing sales. In addition to controlling capacity and audience flow, timed ticketing creates an opportunity to launch flexible pricing models based on low-traffic time periods. The team is looking to incorporate timed ticketing into other experiential entertainment as well, including events with costumed characters.

Restructuring live and location-based brand extensions to create this level of flexibility is crucial to relaunching in-person events in 2022, says WOW Explorations CEO Donna Friedman Meir. The San Francisco-based company was fully funded and gathering a team in early 2020 to begin preparations for the launch of live event WOWtopia. This interactive experience features activities that highlight different regions around the globe and their cultures, such as climbing Mount Fuji or ziplining over the Amazon.

But WOWtopia, like the rest of the world, was put on hold, and Meir spent the bulk of 2020/2021 rethinking her launch strategy. Initially, the plan was to bow first in the US before going global. However, restrictions varied so widely from city to city—along with ongoing complications related to the politicization of the pandemic—that an international pivot became prudent.

“There has always been interest in WOW in China and Europe,” says Meir. “I am in the midst of negotiating a deal with licensing agents who want to rep WOW globally, so there’s a chance we might actually start outside of the US.”

To determine which regions would be the best fit, Meir is examining current reopening plans, along with several other factors such as resident market size (with a focus on family density), the level of attendance for previous cultural attractions, the saturation of similar content offerings, and tourism statistics (to guarantee a stream of new attendants outside of the local population).

Territories including Korea and Japan have been determined to be good prospects, for example, because of their focus on educational experiences for kids.

When WOWtopia is ready to launch—in whichever market Meir determines best serves the event—she has also developed a new budget to provide as much flexibility as possible.

“We have a COVID contingency now,” Meir explains. “It’s a meaningful budget to deal with the implications on the operational side as well as the increase in wages, the cost of goods and ongoing supply chain issues. It’s so hard to determine which of these issues will last and which won’t, so we just put an overall contingency into our budget to deal with them as they arise.”

Building flexibility into its business plan is also how New York-based Round Room Live managed to relaunch live shows in 2021. After the Delta variant led to post-ponements, the Round Room team revised its strategy to announce fewer shows with shorter notice in order to limit the amount of potential rescheduling and cancelling. All shows are still planned well in advance, but audiences are made aware of performances approximately 60 to 90 days beforehand.

“Between Baby Shark Live! and Blippi The Musical, we’ve announced 89 performances for 2022,” says Stephen Shaw, co-president of Round Room Live. “With Baby Shark, we would typically announce an entire year-long tour. At this time, we’re not prepared to do that. We announced the first 35 dates, which covers approximately two months. Over the last two years, our fans have endured so many rescheduled shows, postponements and cancelled tours. We don’t want to get people excited about shows until we’re sure we’re moving forward.” 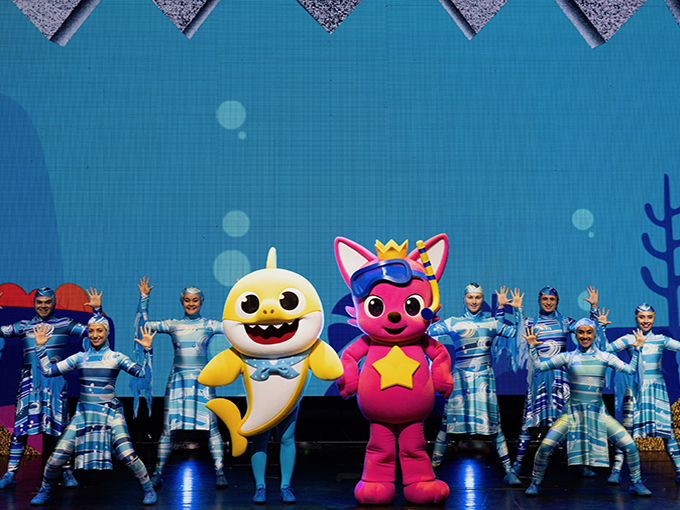 While shows are still planned in advance, Round Room Live is only announcing dates to parents 60 to 90 days ahead of time.

North American shows for Blippi The Musical and Baby Shark Live! begin this month. Stemming from five live tours, Round Room is planning to perform more than 600 shows in 2022, with additional events to be announced much closer to opening curtain. This marks the company’s busiest schedule to date. At press time, the shows were set to run as planned, though the Round Room team is monitoring state and venue regulations in reaction to the Omicron variant.

One area where there is very little flexibility, however, is in the implementation of safety measures in theaters. Proof of vaccination or negative test results, temperature checks upon arrival, contactless entry, frequent disinfection, capacity reduction and mask requirements are all policies that have been established by various venues. The Round Room team works with venue partners and their local governments to ensure that all measures are fully implemented by staff and accurately conveyed to audiences.

Close communication with the parents buying tickets has proven to be especially important in recent months as requirements evolve frequently and with very little notice. For example, certain US markets didn’t initially require proof of vaccination, Shaw says. “Then one day, guidelines came down that people did need that proof to enter the show. We had to make pretty dramatic changes to our own operations in terms of staffing [to make sure enough employees were in place to accommodate those checks] and messaging our consumer base.”

In addition to keeping fans informed, staying connected with audiences is crucial in order to rebuild comfort with—and trust in—live and location-based brand extensions. “We’re in the business of putting large groups of people together,” says Peter van Roden, SVP of global themed entertainment for Warner Bros. Entertainment Group. “We think about safety all the time anyway. When the pandemic happened, safety was already second nature for us.” In addition to making sure families are aware of all the new safety precautions being put into place for various experiences—including concerts, restaurants, hotels and theme parks—Warner Bros. is also working to analyze the comfort level of fans.

Over the past two years, van Roden says the focus for Warner Bros. has been on smaller, more intimate offerings rather than on-brand extensions that involve large crowds. For example, The FRIENDS Experience it created in partnership with New York-based entertainment company Superfly X allows fans to step into set recreations and see props and costumes from the beloved TV series. The experience launched in 2019, and despite capacity limits amid ongoing lockdowns, it welcomed more than 300,000 guests in 2021.

This type of pop-up event is a low-risk offering for audiences and creates an opportunity to begin rebuilding a level of comfort with in-person entertainment. However, while Warner Bros. was working on these smaller brand extensions, van Roden says the team was simultaneously preparing to take advantage of an increased demand for live and location-based offerings post-pandemic.

This was serious, long-term planning with a focus on major projects like hotels and theme parks.

“Everyone is talking about this unbelievable, pent-up demand to get out and do things,” van Roden explains. “Moving forward, we believe full capacity will be even bigger than pre-pandemic.” 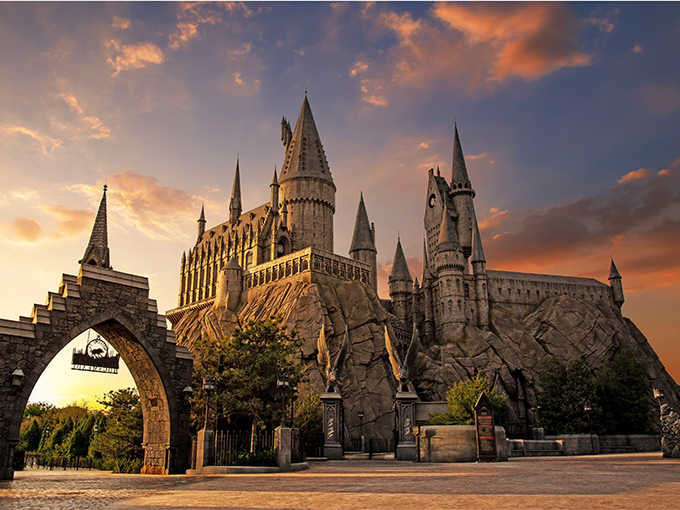 Warner Bros. plans to take advantage of the growing demand for experiential entertainment in its park and hotels.

According to data from Grand View Research, the location-based entertainment market is expected to reach US$30 billion by 2028 (with a compound annual growth rate of 34% from 2021 to 2028).

Until that full return to in-person entertainment occurs, however, Warner Bros. is preparing to take advantage of audiences’ appetite for gathering together during this in-between period by launching elaborate outdoor offerings.

“We have a new Harry Potter experience in the North of England that’s an outdoor wandering experience, so it’s perfect,” van Roden says. “We started developing it before the pandemic, but we accelerated it because it was clear it could really benefit [from the current climate].”

Harry Potter: A Forbidden Forest Experience in Cheshire is a nighttime woodland trail experience that lets fans “cast” their own spells and interact with magical creatures (both projected and animatronic) from the famous Wizarding World franchise. In addition to lights and sounds, the experience also includes audio clips from the film series. Since launching in October 2021, it has hosted more than 130,000 guests.

Focusing on events like walking tours and concerts that can be held outdoors, and therefore accommodate larger crowds, is a natural answer to the question of how companies can carry on during this in-between stage, van Roden says.

“We won’t go back to normal tomorrow— that’s not realistic. Immediately following the pandemic, it was about survival; but that very quickly turned into planning. What are the immediate next steps to get people back through the door? But even more so, what are the opportunities coming out of this, and how can we set ourselves up to take advantage of that?”