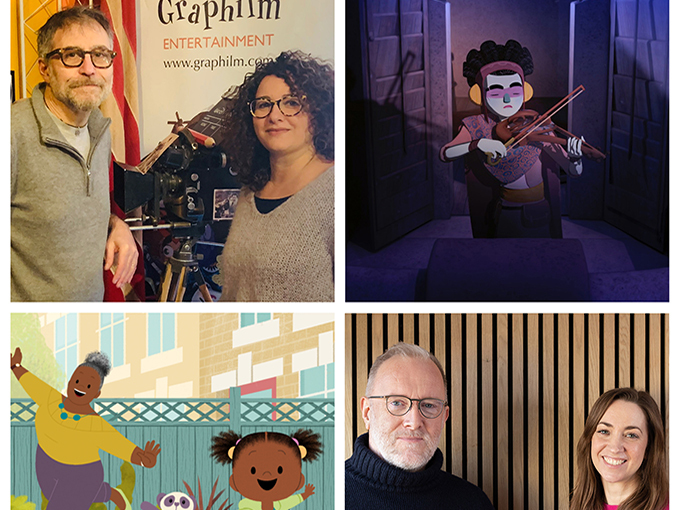 On the heels of acquiring three companies, the Paris-based studio is betting on a local IP blitz and a bigger real-time animation pipeline to future-proof its global business.

Talk about a growth spurt. After recently acquiring controlling interest in two established animation studios—A Productions in the UK (Jo Jo & Gran Gran) and Graphilm Entertainment in Italy (Nefertine on the Nile)—Paris-based Cyber Group Studios has taken a majority stake in Scrawl Animation, a new Singapore-based venture, as part of its ongoing international expansion plan.

Scrawl Animation is a real-time animation shop recently established by Scrawl Studios, Cyber Group’s co-pro partner on toon series Zou and Mademoiselle Zazie. Financial terms of this latest deal have not been disclosed, but Scrawl’s senior leadership team will remain intact. (Scrawl Studios also has an affiliated outpost in China.)

Scrawl Animation has been unofficially operational since Q4 2021, with projects already in the works. Its key objective with Cyber Group is to develop its real-time pipeline, which will help it to compete regionally, internationally and in rapidly emerging sectors like extended reality, says Scrawl Studios CEO and Scrawl Animation director Seng Choon Meng.

All of the new acquisitions are expected to help Cyber Group strengthen its 15-project development slate, consolidate resources, and improve its financing and speed-to-market capabilities, says president and CEO Pierre Sissmann.”The vision was to identify best-in-class companies that share [our] values and could form a bigger group within ours,” he says.

Bristol-based A Productions’ expertise in uniquely British preschool content, as well as its commitment to diversity and inclusion, were big draws for Cyber Group. Well-known for its 2D/CG animation and live-action service work, A Productions was particularly attracted to the prospect of doing more original productions, says managing and creative director Mark Taylor (pictured bottom left), who will continue to head up the company with managing director and senior producer Katherine McQueen (pictured bottom right).

“We’ve dipped our toes into our own IP development, but you need a lot of resources to do it well,” says Taylor. “The very appealing part of the deal is Cyber’s commitment to investing in our new IPs, which will then plug into [its] wider distribution and sales network.”

Later this year, the companies will begin producing their first project together—a 26 x half-hour CG-animated series called Digital Girl. Aimed at six-to 10-year-olds, this action-adventure concept revolves around superheroes Digital Girl and Hack Girl as they face off against threats from the digital world.

Cyber Group’s decision to acquire Rome-based Graphilm also came down to shared values and culture, and an attraction to the prodco’s creative talent. The two companies previously partnered on Graphilm’s 2D-animated kids series Nefertine on the Nile.

This deal will allow Graphilm to cement its position as a top animation studio in Italy, says executive producer Anna Lucia Pisanelli (pictured top right), who is staying on to lead the company with founder and CEO Maurizio Forestieri (pictured top left).

Cyber Group also plans to leverage A Productions’ and Graphilm’s established relationships with their local pubcasters (BBC Children’s and RAI, respectively). And getting closer to broadcasters in Asia is another key part of Cyber Group’s acquisition strategy—hence its decision to take a majority stake in Scrawl Animation.

Using this strategy, Cyber Group and Graphilm have already secured a commission from RAI for their new real-time animated kids series Alex Player. An as-yet-unnamed broadcaster in Singapore, as well as France Télévisions, are also co-pro partners on the show. “By co-producing with ourselves, it enables us to find more resources and immediately talk to major broadcasters,” says Sissmann. Scrawl Animation and French studios Bee Prod and Webedia are working on the series as well.

Moving forward, Cyber Group plans to continue exporting real-time animation projects to Asia, as well as the UK and Italy. It is also eyeing companies in Spain and Latin America for acquisition potential. “If we can build a group that is multi-local and has strength in its own regions, ultimately, with best practices, we’ll create better local and global content,” says Sissmann.