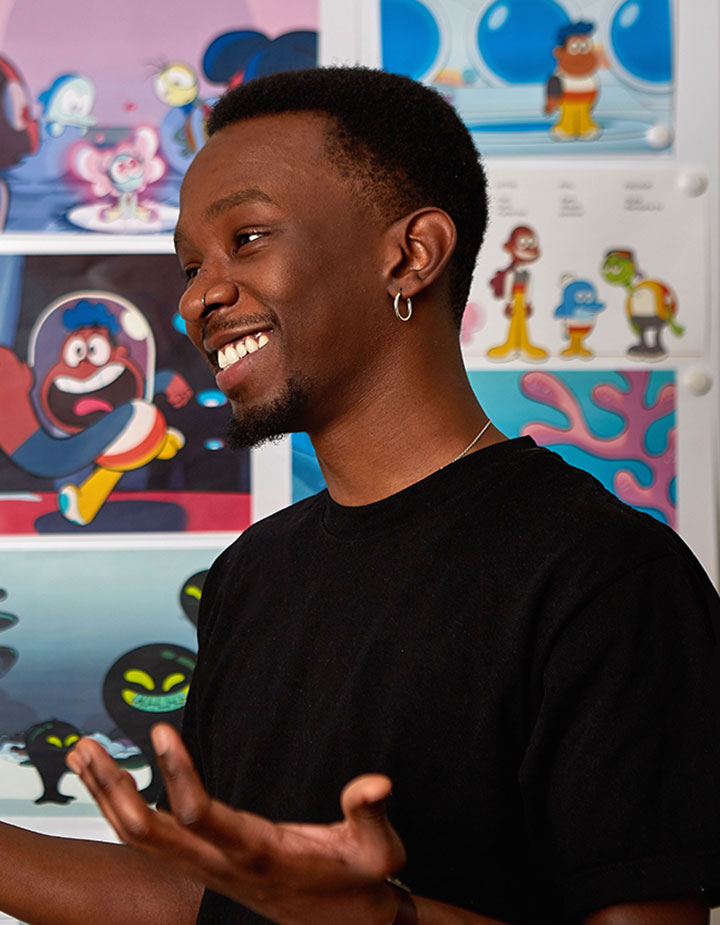 The illustrator and character designer wants his underwater adventure series to reflect the diversity of families and children on screen.

Illustrator and animator Gyimah Gariba was watching David Attenborough’s nature documentary Desert Seas when he came up with the idea for his new 2D-animated series Big Blue—premiering on CBC Kids December 4.

“No one’s been to the bottom of the ocean,” says Gariba. “We’ve been to the moon, but we haven’t really looked into the mysteries of the underwater world.”

The Ghana-born artist worked on a collection of preliminary drawings inspired by the mystique and vast nature of the deep, and eventually brought them to life in this 52 x 11-minute sci-fi comedy series for kids ages five and up. Developed with CBC Kids and produced by Toronto-based Guru Studio (True and the Rainbow Kingdom), Big Blue follows along as two siblings and their quirky submarine crew unlock the secrets of their oceanic world.

Gariba needed more than just a passion for deep-sea exploration to get his show on solid ground, though. Working for Guru as a character design lead at the time, he responded to an internal call for pitches in 2015 and presented his concept to VP of creative development Rachel Marcus. Gariba collaborated with the studio’s development team to establish a story structure and then pitched Big Blue to CBC Kids at Kidscreen Summit 2016. Just a few months later, the project went into development with the pubcaster, and it has since been picked up by Australia’s ABC Kids and Nickelodeon UK, where it will air in January.

Just 29 years old, Gariba has already had a full career. He got his start as an intern at Titmouse, where he worked on the design team for Black Dynamite. He did stints as a character designer on Craig of the Creek and Carmen Sandiego, and then led the character design process for Steven Universe and Guru’s Justin Time. He has even written a comic book called Navel Gazing about self-discovery and introspection.

For his first TV project, it was important for Gariba to fill a gap from his own childhood. He found it hard as a Black kid in Canada to find his place in imaginary worlds. He recalls playing Dragon Ball Z with friends, and not wanting to be stuck playing one of the few Black characters.

“I watched a lot of cartoons growing up, and I always found myself being drawn to things that had a really rich lore I could escape into,” he says. “But there wasn’t anything that had any Black people, so it was difficult to pretend that I was in it.”

Gariba’s feelings are validated by recent research from Toronto-based Ryerson University’s Children’s Media Lab, which earlier this year released findings that only 14% of animated characters on screen are Black, compared to white characters at 52%.

He hopes that Big Blue gives Black kids a chance to see themselves in an animated fantasy world, and find their place more easily among its characters. But while the show’s leads are Black, Gariba does not want that to be the main focus; he just wants to demonstrate family love in all its many forms. Featuring a variety of mismatched characters (like a turtle cousin and dolphin aunt), Gariba hopes kids will understand that there are many different types of families. The show’s brother/sister protagonists, meanwhile, are a tribute to his own siblings and the love that exists between them.

“Companies should be open to exploring how to depict new and different kinds of relationships to better reflect and educate today’s viewers,” says Gariba. “I’ve never seen two families that are exactly alike, and I think the media we watch should have as much diversity as our real lives.”

Looking ahead, Gariba hopes Big Blue will get renewed because he plans to tell more culturally specific stories in the next season—though he’s keeping the details close to his chest for now. In the meantime, he’s fittingly working to support clean beach and anti-littering initiatives in Ghana whenever he’s able to visit. At the end of the day, Gariba just wants to make the world a better place, and he’s not picky about how does it.