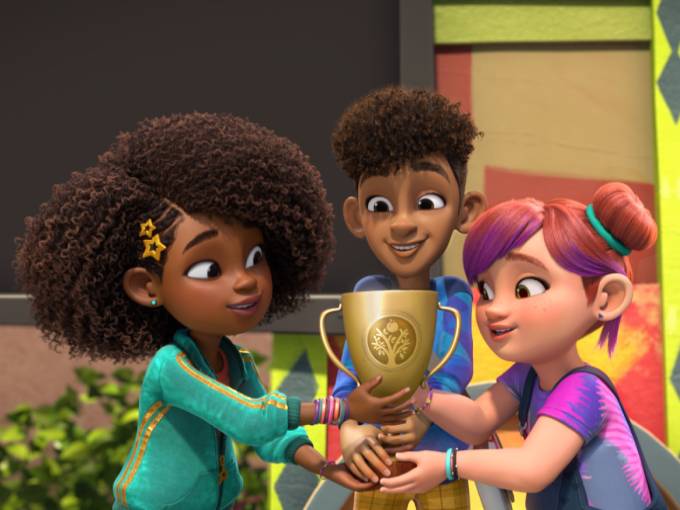 CBBC finds its rhythm with a new documentary, 9 Story has good karma with consumer products, and Moonbug Entertainment partners with Tiny Pop.

The British pubcaster has commissioned My Life: Battle of the Ballroom from Welsh production company Yeti as part of the pubcaster’s ongoing My Life unscripted series. The 30-minute documentary follows two 13-year-old ballroom dancers as they train for the biggest competition of their young careers. One of the dancers, Bailey, has autism and is visually impaired, while Summer has been dancing for more than a decade and hopes to one day go pro.

The My Life banner launched in 2010 and features the inspiring stories of young kids who live with or in unique situations. Past docs in the series have included a deep-dive into life on a floating hospital, the story of a boy who received a heart transplant, and a profile of a young refugee who moved to the UK.

Karma’s World is a 40 x 11-minute music-focused series for kids ages six to nine that premiered globally on Netflix in October. Its titular protagonist works to change the world and find her voice.

The London-based prodco is partnering with preschool channel Tiny Pop to expand the reach of shows like CoComelon. Their collaboration marks the first linear TV partnership for Blippi, Arpo and My Magic Pet Morphle in the UK. These series will also be available on demand through Tiny Pop’s POP Player (offered on Youview, Freesat and Freeview Play).

This is just the latest in a recent string of linear and SVOD deals for Moonbug, which has been actively working to expand its IPs beyond their YouTube roots. In the past few months, it has signed similar agreements with platforms and channels including Netflix, Tencent, Vodafone, Amazon and the BBC.

The Singapore-based studio has cooked up a new QSR deal with European fast-food chain Hesburger for its series Oddbods. Premiums inspired by the CG-animated show will be available with children’s meals at 464 restaurants across Finland, Lithuania, Estonia, Latvia and Bulgaria until the end of this year. The giveaways  include a scarf, a dice game, a card game, a miniature board game and a stationery set.

And it’s not just kids’ bodies that One Animation is focused on nourishing. The company recently launched a mixed-media short series based on its flagship brand that spotlights mental health. The eight x 5.5-minute series Oddbods: Busy Bodies features a live-action yoga teacher who guides preschool viewers through various stretching and breathing exercises alongside the fan-favorite characters.