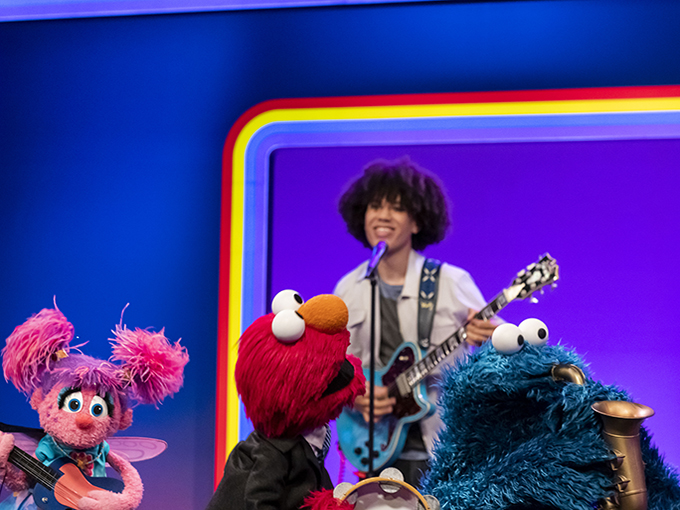 How Sesame is pivoting the Not-Too-Late Show

With a wider focus, more predictability and real kids having fun with celeb guests, the show should be more engaging for preschoolers, says Ben Lehmann.

Sesame Workshop is raising the curtain on season two of its live-action series The Not-Too-Late Show with Elmo. And armed with lessons from the first batch of episodes, the non-profit is taking a more gamified and interactive approach to the talk show that it hopes will better resonate with preschoolers and their families.

The 16 x 15-minute second season still centers around Elmo hosting his own talk show, featuring celebrity guests and kids who take on challenges. The first three episode premiered in the Cartoonito section of HBO Max today, and the rest will drop weekly on Thursdays.

While the first season, which debuted in May 2020, focused on modelling bedtime routines and peppered in segments of comedy-driven celeb challenges, feedback from family audiences instigated a pivot, says SVP and head of live action Ben Lehmann. Kids were the most engaged when they saw other children on the screen, and they wanted a more playful atmosphere overall. So for season two, Sesame has added kid contestants to join the celebrities in the assigned hijinx of each episode (competing to dress a snowman in winter-appropriate gear, for example).

To further strengthen the show’s relevance with preschoolers, Sesame opted to move beyond the hyper-focus on bedtime and tackle a wider range of popular topics, such as pets, cooking and bath time. And in an effort to get parents and kids doing activities together, the series will feature more games the whole family can play, says Lehmann.

“We want to put the viewer at the core of the experience, so they’re not only co-viewing, but co-doing and co-playing along with the kids on screen,” says Lehmann. “This time around, we’re leaning [on] games as a way to impart information to both keep it educational and fun.”

Sesame also upped the show’s predictability to keep preschoolers at peak attention. Episodes will follow the topic of the day across all segments, including challenges and backstage bits, rather than just highlighting the theme in the talk show portions. In an episode about restaurants, for example, Grover struggles to figure out what materials he needs to run an eatery, which also provides clues that will help audiences participate in the later challenge, says Lehmann.

These changes make The Not-Too-Late Show easier to follow and more preschool-friendly, he says, adding that hey also provide more opportunities to take a comedic (but still educational) approach to teaching kids about topics that are already covered in Sesame Street.