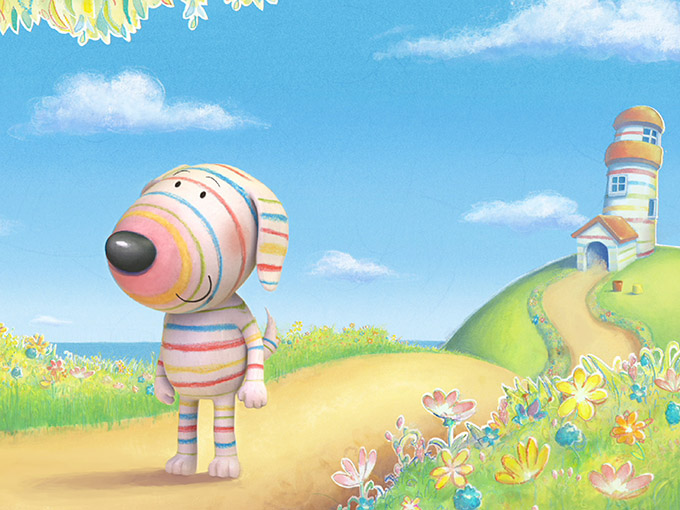 Fall-launching US block Cartoonito has commissioned Dylan from 9 Story and CBC, as well as picking up Bing, Odo and Pocoyo.

WarnerMedia is lining up more content for its soon-to-launch US preschool block Cartoonito, with three acquisitions and a greenlight for a new animated series from Canada’s 9 Story Media Group and the CBC.

Based on a book series by bestselling illustrator/author Guy Parker-Rees, Dylan (pictured) is an interactive CG-animated comedy about a multi-colored dog who wants to try out every career. A CBC original series, the show was developed by 9 Story Media Group and produced by its Brown Bag Films studio in Ireland. Details about the project’s format and premiere date were not available at press time.

Cartoonito has also picked up three existing preschool series—Bing, Odo and Pocoyo—out of the UK and Europe.

Bing was adapted for TV by London-based Acamar Films from a series of bestselling preschool books written and illustrated by Ted Dewan. The show is in its second season (104 x seven minutes) and has aired in 130 territories worldwide. It stars a young bunny learning his way through growing up and experiencing milestones—usually with a bump or two along the way.

Created by Colin Williams and co-produced by Sixteen South in Ireland and Poland’s Letko, Odo is about a little camper at the Forest Camp for Young Birds. This 52 x seven-minute series tackles big issues—like immigration, racism and respect for others—in a way that three- to five-year-olds can understand. It was originally picked up by UK broadcaster Channel 5′s Milkshake! preschool block and KiKA in Germany.

Pocoyo was created and produced by Spain’s Zinkia Entertainment, and follows a group of best friends as they discover the world. It has five seasons (184 x seven minute) completed, and has won more than 40 international awards, including a BAFTA for Best Preschool Series and the Annecy Crystal.

There was no information at press time about the timing of these launches, or how many seasons/episodes had been acquired.

Cartoonito is rolling out this fall on HBO Max and Cartoon Network, and it will include new series such as Batwheels and Little Ellen, as well as multiple projects from Mo Willems. The block was announced earlier this year, along with an overall rebrand for Cartoon Network that moves the kidcaster away from its exclusive focus on animation for the six to 11 audience.