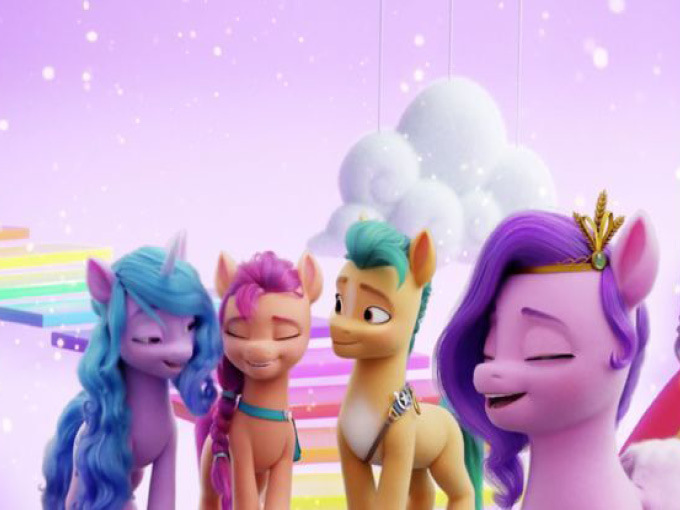 Growth in the TV/Film/Entertainment category—especially from kids TV IPs—drove a 54% net revenue increase in the company's Q2.

Hasbro’s Q2 net revenue is up by 54% over the same period last year (to US$1.32 billion), driven largely by growth from its kids franchises in the entertainment segment.

During last year’s second quarter, the company’s entertainment, licensing and digital revenue fell by 7% to US$89.9 million, while its TV, film and entertainment segment generated US$132.2 million, representing a 32% decline.

But things are certainly looking up for the company now, with chairman and CEO Brian Goldner crediting TV with leading the Q2 2021 bump in today’s earnings conference call. Hasbro’s overall entertainment segment is up by 47% to US$226.7 million compared to Q2 2020, thanks to content sales and YouTube revenue from family brands including My Little Pony (pictured), Peppa Pig and PJ Masks. Specifically, the TV/film/entertainment category (which covers scripted, unscripted and kids content) grew by 48% to US$196.2 million, and family brands is up 39% to US$26.1 million.

Net revenue for Hasbro’s franchise brands category, which includes IPs such as My Little Pony, Transformers, Monopoly and Magic: The Gathering, grew by 72% to US$649.9 million. The company is also expecting this bump to continue, with a major My Little Pony re-launch planned for Q3. The brand update kicks off with Netflix CG-animated film My Little Pony: A New Generation, which Hasbro will support with new consumer products, as well as TV series and specials.

The toyco has strategies in place to keep revenue up as the pandemic eases and families return to theaters, said Goldner. Its partner brands business, which includes Hasbro products for Star Wars and The Mandalorian, grew by 53% to US$212 million in Q2. And the company is also set to roll out consumer products for all-ages films including Paramount’s Snake Eyes: GI Joe Origins, Sony’s Ghostbusters: Afterlife and Marvel Studios’ Black Widow and Spider-Man: Now Way Home.

Moving forward, Hasbro-owned eOne is prepping new all-ages projects and developing more than 30 Hasbro brands into on-screen content. In production now are Transformers: Rise of the Beasts and a live-action Dungeons & Dragons film, which will respectively launch in 2022 and 2023, says Goldner.

Looking beyond entertainment, Hasbro’s consumer products business grew by 33% to US$689.2 million, driven by increased sales for the Nerf, Transformers and Play-Doh brands. Licensed properties such as Disney Princess and Beyblade also experienced a sales bump.

And the company’s Wizards of the Coast and digital gaming segment saw a 117% lift to US$406.3 million in Q2. Dungeons & Dragons and Magic: The Gathering, which launched new mobile game Magic: The Gathering Arena, contributed significantly. This division has been a big growth driver for Hasbro of late. Its net revenue was up 7% in Q1 2021, compared to the same period in 2020. And for fiscal 2020, it earned 15% more than the previous year.