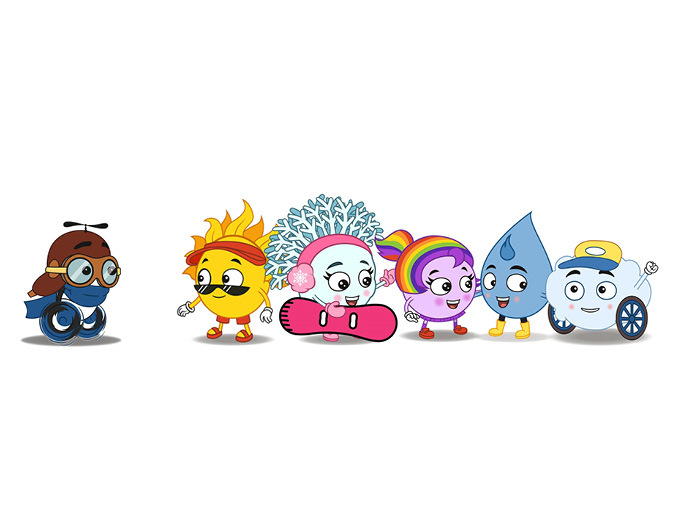 EXCLUSIVE: Focusing on climate change, The Weatherbies has been added to the fledgling prodco's burgeoning slate, says Michael Ford.

Fledgling prodco Threewise Entertainment is spreading its wings with a slate of new kids and preschool series.

To kick things off, the Birmingham-based studio has unveiled The Weatherbies (pictured), a 52 x 11-minute 2D-animated comedy based on Yvonne Fleming’s books of the same name. This eco-focused show revolves around six friends who use teamwork and weather-centric super-powers to solve problems. Threewise has tapped Jodi Reynolds (Peter Rabbit) to write scripts with Fleming. Armed with two completed scripts and a bible, the team is now on the hunt for broadcast, co-production and distribution partners, with plans to begin production in the first half of 2022. Looking beyond the screen, Threewise is also working on an eco-friendly consumer products program and mobile games to build out the brand.

“The Weatherbies is our way of tackling climate change in a way kids can understand at a young age,” says head of content Michael Ford.

Though it just launched in September 2020, Threewise already has a handful of projects in various stages of development. It’s co-producing Unlucky Chucky (52 x 11 minutes) with fellow UK prodco Yamination. The series has been commissioned by an unnamed UK broadcaster, and is receiving funding from BFI’s Young Audience Content Fund. Aimed at seven to 11s, the stop-motion series follows the unluckiest kid in the world as he goes on different adventures with his best friend. It’s based on Andrew Norriss’s book The Unluckiest Boy in the World, and Threewise has brought in Maria Loughlin (101 Dalmation Street) to write scripts. Nicola Andrews of Hemisphere Media Consultancy is handling pre-sales in LatAm, Australia and New Zealand, but the company is seeking additional broadcasters and distributors in other regions.

Threewise has also teamed up with Nickelodeon and Fremantle to produce a live-action kids adventure series called Taylor’s Island (20 x 22 minutes), which was created by Ford, Matthew Cooke and Vincent Lund.

Looking ahead, the company hopes to develop more live-action and animated series, as well as form connections with licensing and distribution companies to get its content onto screens and shelves, says Ford.

“We’re growing our team and seeking more investment so we can keep reaching everyone, from preschoolers to teens,” says Ford. “I’m excited for us to keep growing with new projects.”