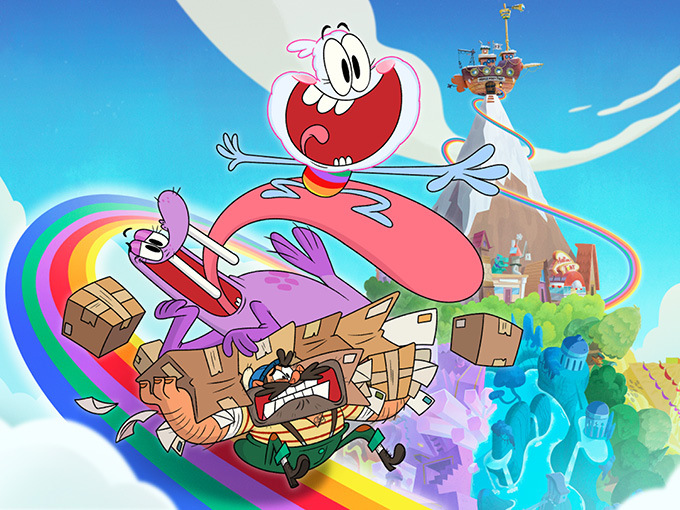 Will Middlemost Post deliver an original hit for Nick?

Nickelodeon's first original animated series in five years may not be a franchise just yet, but it's built to last, says president of animation Ramsey Naito.

When Nickelodeon’s president of animation Ramsey Naito rejoined the kidsnet in 2018, she was looking to take risks on new original animated series. She wanted a show with franchise potential that could stand out in a growing lineup of key legacy titles and spinoffs. Now Middlemost Post—Nickelodeon Animation’s first original series in five years that isn’t based on a well-known IP—is set to premiere on July 9.

The last original animated series Nick greenlit was action-comedy Glitch Techs in 2016. Since then, it has instead focused on big tentpole spinoffs such as SpongeBob’s Kamp Koral and Patrick Star Show,  Star Trek: Prodigy and a CG-animated Rugrats reboot.

But with so much legacy and third-party content coming down the pipe, it was high time for the network to pick a standout original project.

Mixed-media concept Middlemost Post, from SpongeBob alum John Trabbic III, caught Naito’s attention with its character-driven comedy, which is what has worked in Nickelodeon’s most successful franchises to date.

The primarily 2D-animated show features a former rain cloud who wants to brighten everyone’s day, a burly rule-abiding mailman and a magical pet walrus. They all work together delivering packages to the odd inhabitants of Mount Middlemost, having many misadventures along the way.

The first 20 episodes of the series were greenlit in June 2020. “This will be a defining show for us, and I hope it becomes a franchise,” says Naito. Trabbic is co-executive producing with story editor Dave Johnson.

To some, an aspirational, anthropomorphic cloud character might not seem that different from Nick’s famously optimistic sea sponge. But Naito says Trabbic’s unique artistic vision for Parker J. Cloud—and the show as a whole—is what separates Middlemost Post from the kidsnet’s legacy titles and new non-original series.

“The show stands out because of the artist behind it,” says Naito. “What really struck me was the strength of the character [Trabbic] created, and the heartfelt relationships Parker has with the other characters.”

To make the comedy more dynamic, Trabbic also tapped into his experience boarding more than 30 episodes of SpongeBob SquarePants.

“One of the things I liked about working on SpongeBob was they encouraged us to push the bounds of animation, so occasionally we could shape-shift with SpongeBob,” says Trabbic. “It inspired me to design Parker so that he could shift whenever he wants to enhance jokes and visual gags.”

The show’s use of stop-motion, live-action cutaways, photo imagery and claymation should also help it stand out in the kids and family market. “The multimedia elements mix it up in a refreshing way,” says Naito. “The styles are a really fun aspect of [Trabbic]‘s brain.”

For all of its different techniques, though, Middlemost Post follows a tried-and-true Nickelodeon strategy. “We lead with character, comedy and relatability to the audience,” says Naito.

And if Trabbic gets his way, the series will be around for a long time. “We definitely built a world in which to tell oodles of stories,” he says.