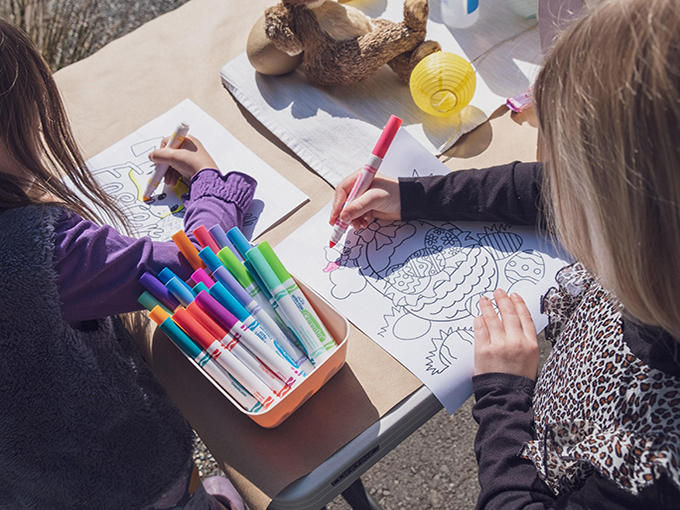 Indie animation studio Mr. Bray is preparing to launch an art therapy app to help to kids cope with their emotions and tap into the growing children’s health tech market.

Brayhaus offers soothing coloring and art activities to help kids deal with anxiety and depression. There will be a free consumer-facing iteration, and a version that hospitals and doctors can use with young patients.

“I started this because of the pandemic and all the stresses kids were facing, but art therapy is something that can help reduce their stress and other anxieties at any time,” says Jesse Bray, owner of Mr. Bray. Art therapy is a first for the Portland, Oregon-based studio, which has previously done animation and design work for the Canada Media Fund and Virgin Media.

Unlike traditional coloring or drawing, art therapy encourages kids to create their own designs from scratch, and there’s usually a trained professional on hand to help discuss the artist’s feelings and creations.

Aimed at kids ages six to 17, the consumer version of Brayhaus will let kids engage in art therapy in a self-guided way, while the hospital version connects users to licensed professionals, says Bray. The app was created in consultation with art therapists, and Mr. Bray is now gathering a medical advisory board to help direct development moving forward.

The consumer-facing beta version of Brayhaus is scheduled to launch this summer in the App Store and Google Play in North America. Parents can anonymously opt in to share feedback, but otherwise Brayhaus is designed to be used completely anonymously and securely.

The more robust healthcare version allows doctors and professionals to guide kids through the activities, communicate with them directly through the app, and track the progress of patients. This product is expected to launch in Q1 of 2022. Bray’s goal is to eventually license usage of the app to hospitals, healthcare researchers and institutions. (Licensing to healthcare organizations would ultimately be the future financial model for Brayhaus.)

There’s a growing market for products and tech that can support kids’ health. The global pediatric home healthcare market was valued at around US$30.9 billion in 2018, and it’s expected to grow 8.3% by 2026, according to Grand View Research. Recently, BrainLeap Technologies launched a video game to help kids with ADHD improve their attention span, and South Africa’s Cabblow has produced a diabetes-focused short film called 3 Teaspoons of Sugar.

Thinking long term, Bray would like to add in features like a communal drawing area where groups can gather to collaborate on projects. He’d also like to build AR and VR components that would encourage kids to go outside and engage with nature while drawing.

“There are plenty of art therapy programs out there, but no apps,” says Bray. “This a scalable way to give kids support while encouraging them to be creative.”

Seeing an opportunity to tackle health content on screens as well, the Mr. Bray studio is developing a new 2-D-animated short series for preschoolers. Linc Thinks (50 x two minutes) features a canine protagonist who learns about things such as having ADHD, dealing with the pandemic and being on the spectrum. The short episodes will quote research and encourage families to check out the free app, says Bray.

Photo by Alan Rodriguez on Unsplash