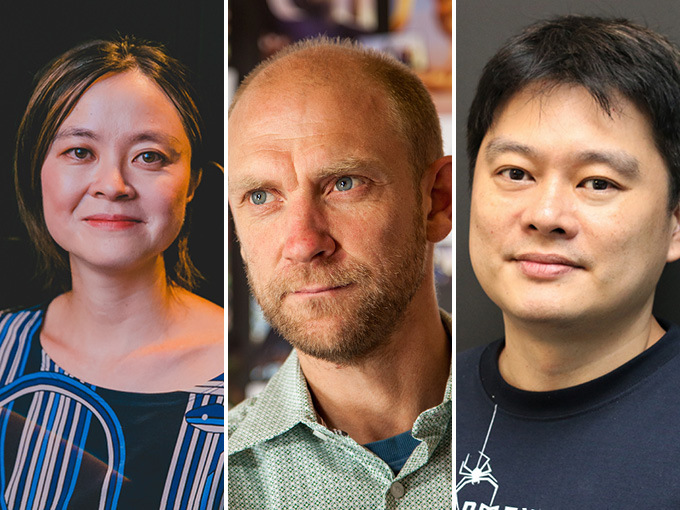 One Year Later: How are producers coping?

Atomic Cartoons, Triggerfish, Birdo and more weigh in on how they adapted to 2020's challenges, and what they're most concerned about in the year ahead.

One year after COVID-19 was officially declared a global pandemic by the World Health Organization, Kidscreen asks producers around the world to reflect on how they have been affected, and what they’re worried about next.

What was your biggest concern last April, and how did things turn out?

Stuart Forrest (pictured middle), CEO of Triggerfish Animation (South Africa): We were midway through [production on] a feature film and at the beginning of a new TV series co-production, so our concern was how would [the pandemic] affect our ability to complete those projects. On the feature, we actually did very well. Moving people to work-from-home was quick and seamless, and productivity was largely maintained. On the series, we had more difficulty establishing new relationships remotely, and without any face-to-face time with key partners, we had a larger struggle to set up the international team and production processes efficiently.

Zeno Gabing, executive director and co-founder of Giggle Garage Animation (Malaysia): We had so many questions, but our main [concerns] were whether schedules and budgets for our projects would be impacted. Despite this, we successfully completed a full 52 x 11-minute CG-animated series called Time Traveller Luke that went on to win Best 3D Animation for TV Programme at the Asian Television Awards in January.

Luciana Eguti (pictured left), executive producer at Birdo Studios (Brazil): Our major concern was whether we would be able to work from home with efficiency. We assumed that [we] would not [achieve] the same production pace we had while working with everyone in the studio. Overall, in terms of production flow of materials, approvals and information, we adapted to the digital tools available and the routine of remote calls, and managed to reach a satisfactory pace for our productions. Communication is still a challenge, and we are constantly improving our systems and trying new ideas to keep the teams going.

Clara Njeru, Kukua’s chief product officer (Kenya): We had just started our first-ever production when the pandemic hit. We quickly realized that we would need to arrange for our team to work from home, which included moving our director back to the US. A big challenge [turned out to be] doing voiceover recording sessions at home and maintaining the same quality. Luckily, we did them all in Kenya, where things opened up by the third quarter and we were able to get back in the studio.

Chi Sim Tang (pictured right), CEO of Omen Studios (Singapore): From a business perspective, as content producers, we felt the economic impact of the pandemic. Licensing and commissioning orders ceased for a period of time, and then resumed, but often with reduced budgets as networks and broadcasters took stock of the pandemic situation.

Nikki Price, director of development at Frederator (US): My biggest concern last year was that working from home would impact our pitching process. It was hard to imagine that a buyer would invest in a project without a proper in-person meeting. I’m happy to say that I was wrong! That being said, we’ve had to change up our approach a bit. We’ve considerably shortened our presentations, added in more exciting visuals, and come up with other creative solutions to help make our video pitches as engaging as possible.

What has been the biggest change to your business in the last year?

Jennifer McCarron, CEO of Atomic Cartoons (Canada): In January, we were thrilled to announce that we’d hired Richard Goldsmith as president of consumer products and distribution. This new division will allow us to further leverage and set up more of our own IPs.

Forrest, Triggerfish: We take on a lot of interns, and we’re always providing on-the-job training—doing workshops in schools, attending job fairs, etc. That came to a halt this year, and it will likely have a long-term effect. On the plus side, seniors and leads are less distracted by training juniors and are more productive.

Gabing, Giggle Garage: We produced a couple of episodes using real-time technology last year. We will continue to invest in this because we want to be able to create high-quality production and deliver it without waiting 15 to 18 months.

Barbara Stephens, content CEO of Studio 100 and managing director at Flying Bark (Australia): Given the lower impact that COVID-19 has had on our international production capacity, we decided to invest significantly in development because we can promise a reliable, uninterrupted production. We are now launching a number of projects with creators spanning LA, Australia and throughout Europe.

Tang, Omen Studios: Other than new titles, and a new London office, we are investing in the edtech space. Tech and media have converged and will continue to do so in this new age of digital connectedness. We have new apps planned for the year and are excited to see them come to life.

Marc du Pontavice, CEO of Xilam (France): Since we acquired CG studio Cube Creative, the integration tasks we needed to carry out were quite difficult to achieve with everyone working from home. The one thing we did have to learn from scratch was effective virtual pitching, and the lack of physical interaction with buyers is a certainly a big disadvantage.

Eguti, Birdo: As a production house in Latin America, our biggest challenge is the globalization of the whole animation production industry—yes, we have access to more projects than before, since remote work is the norm now. But at the same time, we have to compete globally for the same workforce because artists and animators can now be hired from anywhere. In that respect, Latin American budgets for production weren’t affected by the pandemic, and it makes it very hard to hire good professionals when they are able to access budgets from Europe or North America.

McCarron, Atomic: We worry about the hours the teams are putting in, and the pandemic’s effect on everyone’s mental health. Without the normal separation of home and work, it’s so easy for the lines to blur, and the generalized state of anxiety in the world has had an effect on absolutely everyone.

Forrest, Triggerfish: Not being able to spend time with our business partners is the biggest concern. This industry is intrinsically relationship-based, and we’re losing opportunities to develop and increase the health of those relationships.

Tang, Omen Studios: The pandemic has reduced budgets, lengthened sales order time, and forced content consumption to go digital and online. As a business owner and content producer, these are things we need to live with and adjust our business to. And some of these trends were already developing, but the pandemic has accelerated them.

Price, Frederator: The sheer amount of cartoons being made means that the pressure is on to create content that stands out. We want to make hits, not shows that ultimately just get buried in a sea of content.

Du Pontavice, Xilam: The pandemic has accelerated a change in viewing habits that was already underway, and there are concerns around how our local broadcasters in Europe will be able to respond and adapt to such significant changes. These partners represent a great diversity of voices in our business that we don’t want to lose, but we’re confident they can rise to the challenge.

Check back tomorrow for part two of Kidscreen’s One Year Later series.