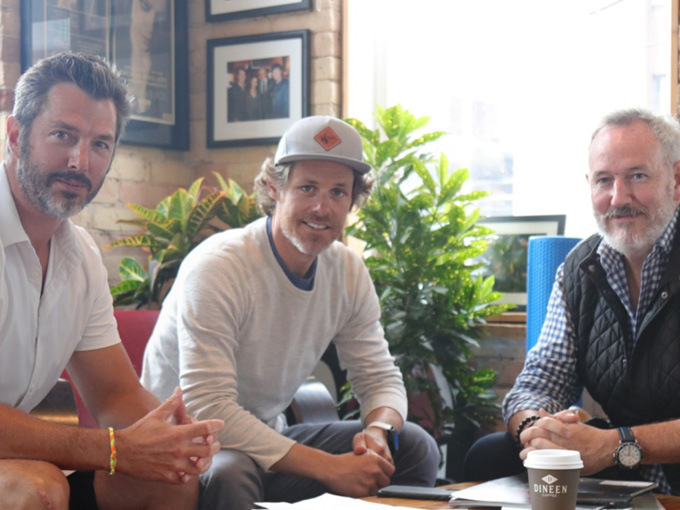 What are Boat Rocker’s post-IPO plans?

Taking the company from a two-person production operation in 2003 to a publicly traded media company employing 850-plus people has been the culmination of a great deal of blood, sweat and tears, says co-founders David Fortier (pictured left) and Ivan Schneeberg (pictured middle).

In the first five years, Schneeberg says they “learned how to be good creative TV producers.” Then in 2008, the company entered a second phase when BBC Worldwide became its worldwide distributor and invested in the business. During this period, Schneeberg and Fortier say they were figuring out how to build a more diversified production company, while also producing their first bona fide global hits—dance-themed kids series The Next Step and primetime dramas Orphan Black and Being Erica.

The company’s third stage was emphatically focused on diversification and growth, with the on-boarding of Fairfax Financial as a private equity partner in 2015 to build out an independent studio capable of producing across all genres. Between 2015 and 2020, the company has made a number of high-profile acquisitions, including Proper Television, Insight Productions, Radical Sheep and Jam Filled Entertainment in Canada. Internationally, it bought Fremantle’s kids and family business, as well as US prodcos Platform One Media and Matador Content.

The fourth and arguably toughest phase is taking the company public.

“Now that we’ve got those assets assembled, we’re looking to a new stage of growth. And in partnership with Fairfax and our advisors, we’ve found that the most efficient capital is the public markets,” says Schneeberg.

For a number of years, industry insiders have speculated that Boat Rocker would eventually go public, though its founders had never publicly discussed the possibility in any great detail.

While it was always an aspiration, the arrival of the pandemic slightly accelerated the speed at which Boat Rocker pursued the IPO, says Fortier. Once the company had ensured the continuation of its various productions and production relationships, the team undertook an examination of the markets, he says. “We thought the tailwinds in the industry were great back then, and we think they’re great right now.”

What came next, as a precursor to the IPO, was a realignment of the Boat Rocker Studios banner in order to facilitate greater collaboration across its portfolio of companies. As part of the reorg, Platform One Media and Toronto-based Temple Street were folded into the scripted side of Boat Rocker’s Studios division, meaning the company is now set up in three divisions: scripted, unscripted and kids & family.

Through the IPO, the company raised around US$135 million (CAD$170 million). Of that, approximately 63% will be used to repay all of its term debt, 13% for short-term funding for scripted productions, 15% to support the business plans of its scripted, franchise and brand management teams, and 4% for acquisition of capital assets. The remaining 5% will secure and develop IPs, as well as fund potential future acquisitions and/or strategic investments.

As to whether Boat Rocker will continue the M&A streak it’s been on for the past six years, Fortier and Schneeberg say it’s unlikely post-IPO.

“In Canada or the US, I don’t think we’re going to necessarily be looking to buy fully built-out studio units that produce in any of the genres we already produce in. I think that might be inefficient,” Schneeberg says. What’s more likely, he adds, is that Boat Rocker will set up partnerships with creatives.

In addition, after expanding into talent management with its majority acquisition of Untitled Entertainment, Boat Rocker said literary management was an area it might be interested in exploring in the future.

As the company’s co-founders look to the future, building global franchises in scripted, unscripted and kids is top of mind. And now, after expanding its business through organic and M&A growth over nearly two decades, the company believes it has all the tools in place to become a Canada-based juggernaut on the international stage. The public markets are the next logical step in that journey, says Schneeberg.

“They’re our next partner in this venture, building out what we hope will be a next-generation, world-beating entertainment business.”

Copied from Playback Daily. The original piece can be viewed here.