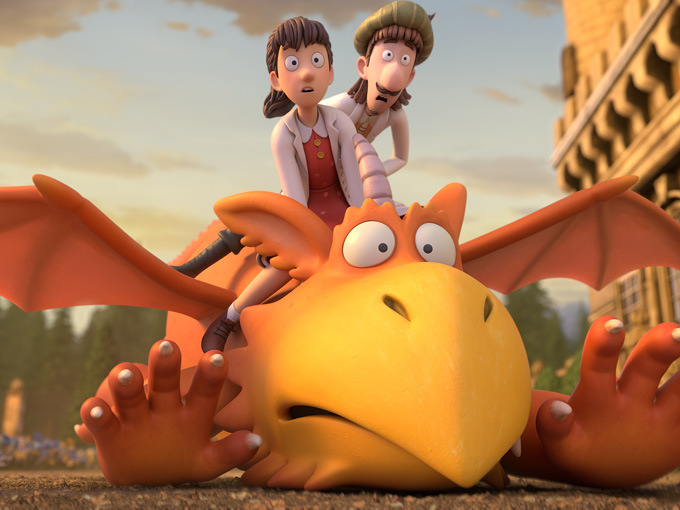 What does ‘family-friendly’ actually mean?

Shows for the whole family are spiking in popularity among both viewers and buyers. Some of the biggest producers of this catch-all content share what it looks like, and how to make it well.

When Fear Factor was released in 2001, it was never supposed to be a show the whole family sat down to watch together. It was made specifically for men. But then something else happened.

“We thought that people who like sports would like this show,” says Jayson Dinsmore, the executive at NBC who was leading the show at the time. “Kids showed up first—they just found it so funny. Then parents heard their kids giggling in the other room, so they went in and watched it, too. Before we knew it, the show was a giant hit [with] all demos.”

Fear Factor was at the tail end of an all-family viewing trend that played out at the turn of the millennium. Content swings like a pendulum, and in the ’90s—when families were beginning to broaden their TV set collection—the main goal was bringing everyone together in primetime to watch programs like Full House, Fresh Prince of Bel Air and The Nanny.

Thanks to the boom in premium cable channels and the early days of illicit streaming in the aughts, TV swung from wholesome family time to how far you could push boundaries and shock viewers. HBO’s The Sopranos and AMC’s Mad Men ushered in an era of peak TV, but were decidedly not for kids to watch with their parents. Meanwhile, the younger set’s growing access to personal computers meant they didn’t need to watch what their parents were watching—they could find something all their own. The massive expansion of streaming services like Netflix and YouTube in the 2010s solidified this shift from content for all to content for one.

But as Taylor Swift put it on her recent album, family-friendly content “came back stronger than a ’90s trend.”

There are several theories about why all-inclusive entertainment is so popular right now, and the pandemic is at the top of the list. Despite spending their days in the same home, families tackle virtual school or work Zoom calls separately. But at the end of the day, they come together to watch something on TV.

In a recent survey of 3,000 US parents, WildBrain Spark and TV industry analyst nScreenMedia found that 75% of respondents say they watch video content several times a week or more with their kids.

Once the pandemic ends, two in three parents expect the time they spend watching content with their kids will either stay the same or increase.

Reaching the whole family is something movies have been doing well for years. Most of the top-10 highest-grossing films (Avengers, Frozen, The Lion King and Star Wars) are four-quadrant titles. Isn’t it time for TV to apply the same strategies? 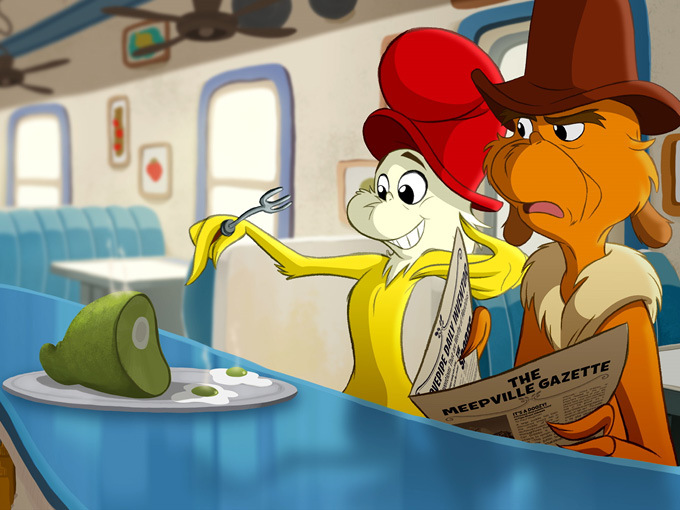 Like other aspects of TV, streaming has had a huge influence on the demand for family- friendly content—and it’s forcing producers with projects in development to rethink their audience. Green Eggs and Ham (pictured, above) was originally geared at a kid-only demo, says Audrey Diehl, SVP of series at Warner Bros. Animation. Once the show landed on Netflix, it really leaned into the family audience for the first time.

“I think [content buyers] are just looking to keep people engaged now,” says Diehl. She adds that broadening appeal to a wider audience helped do the well-known Green Eggs IP justice, especially when working with Netflix and the big-name talent attached to the show, including Michael Douglas, Diane Keaton and Eddie Izzard.

Once the show’s audience shifted to include parents, other changes fell into place during development. For example, the quality of the animation needed an upgrade, and new writing staff with experience on primetime comedies were hired to work alongside kids writers. Serialized storylines were also added, and the overall show budget increased.

“When we think of family-friendly content, we think of a series that works for kids and adults equally, and no one is making a huge compromise to sit down on the couch to watch something,” says Diehl.

Building off the multi-generational appeal of the Gremlins movies, HBO Max’s Gremlins: Secrets of the Mogwai was always meant to be a cross-demo series. But the long-standing familiarity with the brand among Millennial parents meant finding a balance for both kids and adults.

“There has to be a little bit of horror, or adults [will] feel like we just made it into a baby show,” says Diehl.

The serialized story integrates real stakes—matters of life and death that can be a bit scary for kids. This broader target also comes through in the design, which is complex and includes beautiful landscapes of 1920s China, Diehl adds.

While building on an existing IP can be a great way to pull in multiple audience groups, it also means producers are left dealing with multiple sets of expectations. The holidays have long been associated with festive traditions, and while there’s no denying the comfort of gathering around a favorite special, London’s Magic Light is seeing longevity in creating cross-generational family content. Each year, families across the UK watch The Gruffalo and Zog (pictured, at top) and the Flying Doctors on the BBC.

The key to success, says Vici King, head of production for Magic Light, is that the prodco works off of kids book properties that have been around long enough that, even if they don’t appeal to adults now, they appeal to their sense of nostalgia. And while the specials are made more for kids than parents, there are tricks Magic Light uses to pull the adults in and keep them on the couch. They include using iconic voice actors like Helena Bonham Carter and Robbie Coltrane, more mature classical music, older-skewing humor that might fly over kids’ heads, and certain characters that are just for parents.

In Zog and the Flying Doctors, the themes of fitting in and finding a place in the world also tend to resonate across generations. “Everyone can identify with a misfit,” says King. “That’s a story anyone can buy into and relate to on a personal level.”

She adds that the writers also lean into humor and make sure to have unexpected moments to get adults and kids laughing together. “When you sit down as a family and find the same thing funny, it’s a really special bonding experience,” she says. 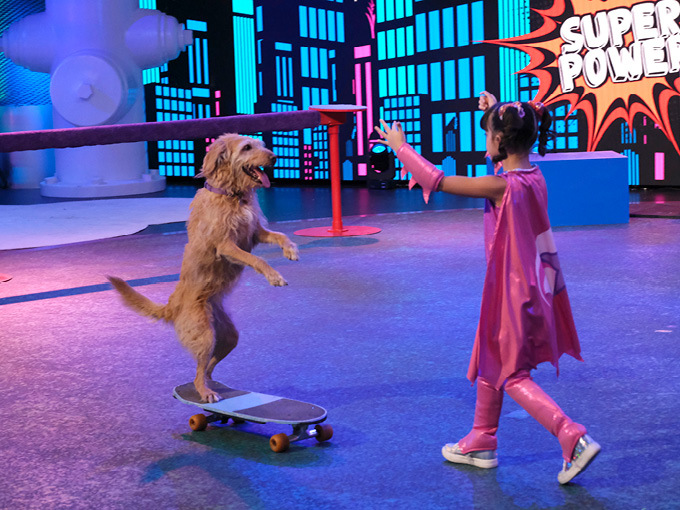 Dinsmore, now president of alternative programming and development at Fremantle, says a big lesson he took away from his Fear Factor days is this: If you can get the kids, you can get the parents.

It’s a tricky balancing act, and one he didn’t fully grasp until recently. Dinsmore pitched Nickelodeon multiple times over the years, but was always turned down.

“We developed shows thinking we knew what their audience would watch. And [in their] feedback, they’d tell us to broaden it out,” he says. “Nickelodeon said, ‘Make sure that parents will enjoy it as well, and don’t make it for little kids, because those kids aspire up.’ They know their audience better than we do.”

Eventually, he was able to create a show that worked, and he is now executive producing Unleashed (pictured, above) for Nickelodeon. The live-action animal competition series includes a water-skiing squirrel, a cheerleading goat and a horse that plays soccer. In each episode, the judges and kid jury crown the night’s “Most Entertaining Pet.”

The only way Fremantle was able to make Unleashed work for multiple audiences was to find something families were collectively obsessed with—their pets.

“I’m sure there’s some research that says every seven minutes you have to have a joke for the adult audience in a kids show, but I don’t have that data,” says Dinsmore.

“Instead, in every performance we ask: What appeals to kids here, what appeals to adults here, and how are we going to make that balance?” 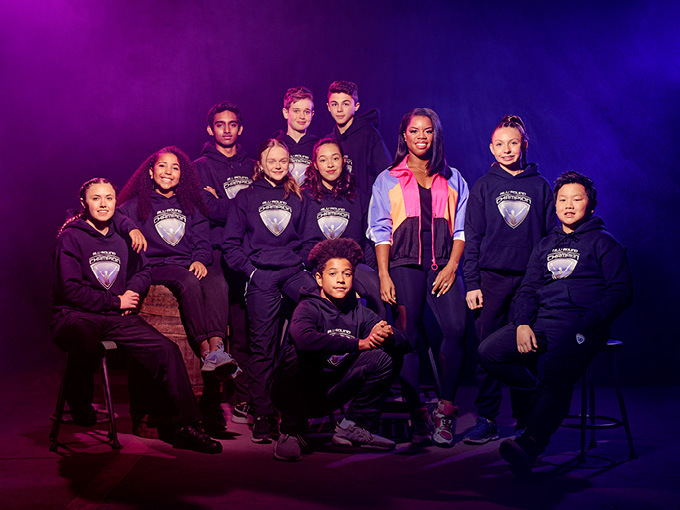 All-Around Champion talks about training to engage both parents and kids.

Grabbing not just kids and parents, but also grandparents, requires show elements that are aspirational, relatable or nostalgic (often all at once) to different members of the family, says marblemedia CEO Mark Bishop.

For example, in the prodco’s All-Around Champion (pictured, above), there’s a lot of talk about training, which is very aspirational to a kid, says Bishop. The show focuses on what kids could be, what they dream of for the future, and the work they need to put in to achieve their goals.

For parents and grandparents, it’s more relatable—particularly if they have a kid in training—as well as nostalgic (recalling their own younger years in sport). But while these three elements mean different things to different generations, they are all brought together in a single show.

The importance of bringing audiences together in this streaming era cannot be understated, says Bishop. “Successful co-viewing content has different points of entry or engagement. That could be kids finding the show and telling their parents about it, or the other way around,” he explains. “But overall, the end goal is to build excitement so [families] actually want to share that content.”

Multi-generational appeal increases the odds of someone in the family finding—and liking—the show. But having it speak to multiple audiences also ups the likelihood of repeat viewing.

If a kid jumps ahead without their parent, but then talks about the show over the dinner table, the whole family is far more likely to sit down to catch up on missed episodes, says Bishop.

And demand for this type of content isn’t going anywhere. Research firm Parrot Analytics has found that overall demand for family-friendly content has risen 3% since the beginning of 2020.

Now that producers have figured out what works when it comes to engaging the whole family, broadcasters are chomping at the bit to gather those eyeballs and turn them into subscribers. Even though producers say the growth in demand for this type of content was likely brought on by the pandemic, trends were swinging this way already.

“The advancement in technology has created an opportunity, and the platforms have enhanced it,” says Bishop. “[Now], we’re seeing this on the sales side—the rise in desire for co-viewing content—because people are all home together.”