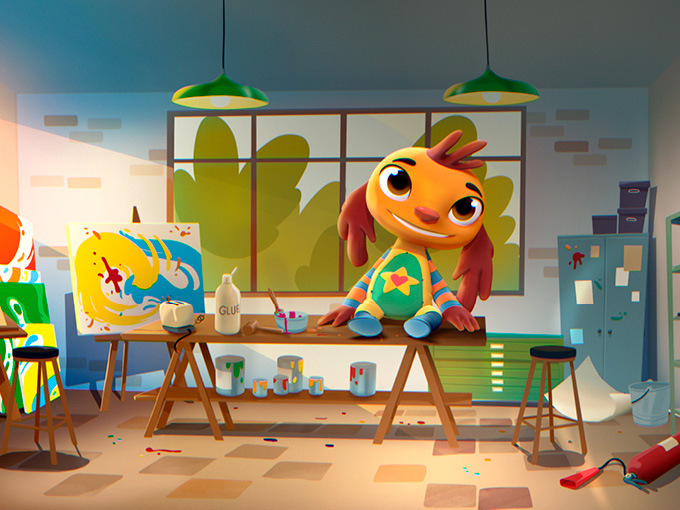 Tilly plans to show kids scary things as a way to teach them bravery, says writer Lina Foti. Will the tactic work?

Spanish studio Planeta Junior is expanding into original content for the first time with a show that aims to help kids ages four to seven learn about being brave by exposing them to scary things, rather than avoiding them.

“Many kids shows don’t talk about fear in a productive way,” says Lina Foti (Hair Love), head writer on Planeta’s new series Tilly. “They either never show frightened characters or they’re about actually scaring kids. But we’re using Tilly to help kids explore their feelings, and help them understand how to deal with everyday things that can scare them.”

The 52 x 11-minute mix of 2D and 3D animation is about the kids in a newly blended family, who encounter frightening things in their everyday lives and summon their magical friend Tilly to help them overcome their fears.

This isn’t a horror series, and it isn’t about scaring kids. But it will show characters who become anxious and scared in order to demonstrate in the storytelling how to work through these emotions, says Foti.

In one episode, a character becomes anxious when she tries to order ice cream and isn’t familiar with the local language and culture. This triggers some anxiety for her, and Tilly transports them into a magical world where the ice cream clerk becomes an alien, and the quest to get the ice cream transforms into a comical slapstick heist. Eventually, it’s Tilly’s encouragement that helps the kids face their fears back in the real world.

“The challenge for us was to translate very cerebral concepts around fear and anxiety in a show for kids,” says Foti. “But the solution was to move the kids into a fantasy world when they’re scared, so that they can have these action-packed and funny adventures.”

Planeta Junior is handling production and worldwide distribution on the series, which is still in development. Its current goal is to secure broadcasters.

Tilly is entering the market at a time when kids are dealing with a lot of fear. According to the Centers for Disease Control and Prevention, 7.1% of US kids ages three to 17 (around 4.4 million) have diagnosed anxiety. COVID-19 has also contributed many additional stressors—Smarty Pants found in its recent Brand Love study that one in nine kids were feeling stressed out or overwhelmed in July 2020, when it surveyed 9,000 US families. Foti hopes Tilly can give kids a roadmap for understanding their feelings and encourage them to not give up when things get frightening.

This unique approach to teaching kids how to handle fear could be a smart play, says Sharon Lamb, professor of counselling and social psychology at the University of Massachusetts Boston. You can’t model bravery for kids if you aren’t able to show them overcoming what they’re afraid of. It’s a fine line, however, between trying to teach kids how to overcome their fears and actually scaring them or teaching them to be afraid, she says.

“My hope is that when kids see Tilly, they can recognize they have the power within themselves to overcome their fears and be more resilient,” says Foti. “It’s at this young age when kids are starting to develop a lot of their fears, as well as the ways they’ll deal with them.”