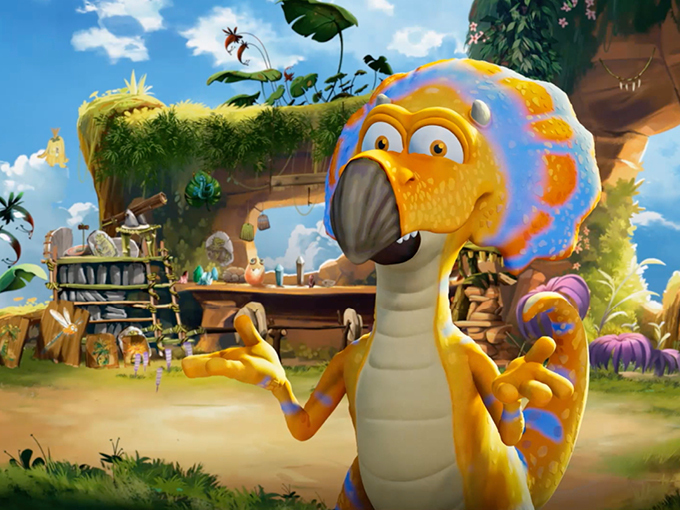 Welcome to the age of real-time animation

“Adapt or become a dinosaur.”

It’s blunt advice, but it’s what gaming consultant Andreas Carlen say kids content producers need to do if they are considering investing in a real-time animation pipeline.

Real-time technology was introduced decades ago for the gaming industry, but it’s only in the last few years that it has been increasingly integrated into TV and film production—most famously in Disney+ series The Mandalorian—due to factors including decreasing costs and better access to improved, off-the-shelf software.

Game engines make it possible to simulate images on a computer fast enough for players to interact with them, meaning game characters can move fluidly in myriad ways, while simultaneously interacting in a changing digital environment.

One big benefit for animation and live-action TV and film productions driven by visual effects is the fast turnaround on high-quality image renders the tech allows. Game engines have the processing power to do layout, blending, lighting and compositing in one place with rendering happening either almost simultaneously or in just a few hours, depending on the quality. Typically, banks of servers at a studio or a large render farm handle the process, and it often take days to complete final renders.

The speed offered by real-time rendering has been particularly important for studios over the last year since demand for animation has skyrocketed during the pandemic. With an increasing number of families tuning in to toons, buyer demand has risen sharply to fill programming gaps left by live-action production delays.

Real-time pipelines also reduce the number of real locations, physical sets and background actors required for productions because game engines are getting better at simulating realistic environments, and blue- and green-screen technology is improving. The process became a key workaround for studios dealing with COVID-related travel restrictions and social distancing guidelines. Disney+, for example, was able to keep shooting The Mandalorian during the pandemic through its use of Industrial Light & Magic’s Stagecraft technology, which projects backdrops onto giant LED screens that surround the actors.

Carlen says the benefits of popular game engines like Unreal from Fortnite-maker Epic Games and real-time 3D development platform Unity are too significant to ignore—especially if production companies are to keep pace with increasing global demand for high-quality animated content by SVODs, AVODs and live-streaming platforms like Twitch that need more content faster.

“If you are a studio and you forego this opportunity, you will no longer be relevant in the changing landscape of streaming and gaming,” says Carlen. “Studios need to stay up-to-date, and real-time [technology] is the way to do it.”

Carlen is no stranger to Cyber Group, having provided pipeline support and consulting services to the studio for the last decade. But because of his experience with Unreal, he’s now in-house permanently and tasked with propelling the company’s new real-time animation pipeline.

Other companies currently using real-time tech on animated projects include WildBrain and Bron Digital in Canada, plus Trick 3D and AMGI in the US, and 3DAR and Hookup Animation Studios in Latin America.

According to Epic Games, the number of film, TV and animation projects that were using or had used Unreal Engine had doubled by the end of 2020. Film and TV projects also secured 25% of US$47 million from the company’s Epic MegaGrants program last year. As for Unity Technologies, it’s mostly been focused on the mobile gaming market, but is making inroads in the animation sector, too. In 2019, the company took home its first Technology and Engineering Emmy win for its collaboration with Disney Television Animation on short-form series Baymax Dreams.

Despite the added cost of integrating the tech into a traditional pipeline, Cyber Group studio SVP  and associate producer Olivier Lelardoux says the savings should significantly offset the price tag.

“If a regular animated series in Europe costs upwards of US$8 million, Cyber Group could cut 35% of the budget on a real-time production,” says Lelardoux. “Another exciting thing about Unreal is we don’t have to remake assets over and over like we used to if they were needed across TV, gaming, YouTube or Instagram. Now, everything can be done in Unreal.”

Looking ahead to the future, as more TV series are made in real-time animation pipelines, studios that don’t offer the technology, according to Lelardoux, may risk losing out on international co-production opportunities.

“If a studio doesn’t use Unreal or have strong experience with it, we would likely not consider it for co-production business, even if it has a great track record in animation,” he says. “It would need Unreal to better align with our pipeline and processes.”