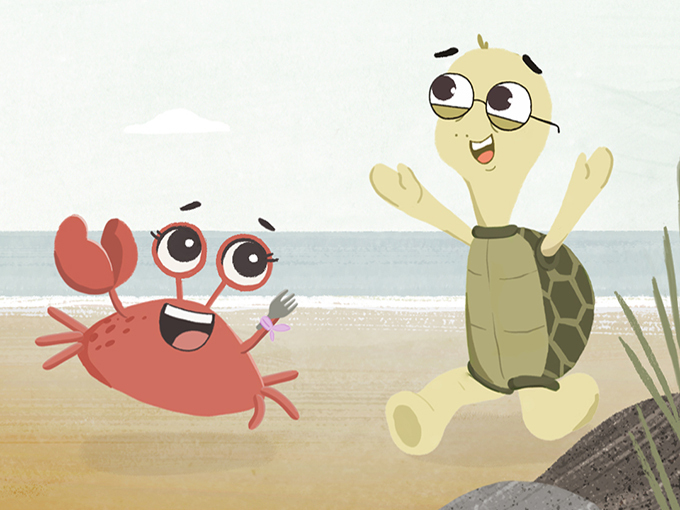 With a new treaty between UAE and Israel opening business doors, two prodcos are creating a show that taps into their shared experiences.

Dubai-based Blink Studios and The Hive in Tel Aviv hope to bring some peace to the Middle East with the first kids co-pro between companies from the United Arab Emirates (UAE) and Israel.

Crab & Cake is a 26 x 11-minute preschool series that the studios began developing shortly after the UAE and Israel signed a peace treaty in August 2020. The treaty helped cool tensions between the countries, which had been at odds since the ’70s.

Prior to the agreement, businesses from both regions were prohibited from interacting with each other, citizens couldn’t make calls between countries, and borders were almost entirely closed. Now, with lines of communication open, the studios saw an opportunity to tell a story inspired by their shared experience of separation and friendship, which will hopefully resonate with audiences globally, says Nathalie Habib, partner and exec producer at Blink Studios.

After the countries signed a peace agreement, Habib—who was interested in seeking co-pro partners from neighboring territories—quickly jumped on the chance to tap into Israel’s resources and lean on the country’s talent.

She reached out to a number of Israeli studios, and The Hive, which was also on the lookout for co-pro opportunities, shared a few of its in-development projects. With Crab & Cake, Habib saw the chance to model positive behaviors for preschoolers and tackle a story about friends who are more similar than they originally think.

The Hive created the concept to push into the preschool genre and appeal to international markets, says owner and creative producer Amit Russell Gicelter. The two studios are now working together to develop the show’s humor and soft watercolor art style, which will be major selling points as they bring the concept to market, he adds.

The series revolves around a crab and turtle who go on daily adventures at a beach, where they learn about environmental sustainability and each other. It focuses on teaching kids about overcoming misunderstandings, working with others to solve problems, and creating friendships regardless of who you are.

They are now seeking financing and presales, with the hope that the series can snag a global broadcaster or streaming platform Crab & Cake has a completed bible, and writers from Jerusalem and the UAE are currently working on scripts. The prodcos are prepping a trailer and plan to start production in March, with the goal of having episodes delivered in 18 months.

The Middle East has historically been depicted as a place of conflict, says Habib, and on a personal level she’s hopeful that teaming up with The Hive—and showing that those who are different can work together, both on screen and off—will be a first step towards showcasing that the region and local studios operating there can be positive creative spaces.

“Crab and Cake are two creatures who are not the same, but they’re of the same species,” says Habib. “And it’s similar to us in the UAE and Israel. We’re all human, but we’ve been at odds. Now we have a chance to unite—and unite kids—around the common interest of preserving the world around us.”