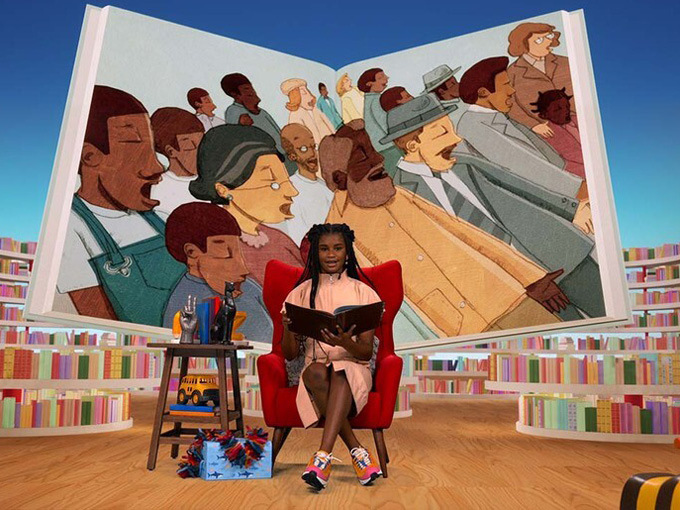 Disney+, Apple TV+, Moonbug, Blue Zoo and Ludo Studio all joined the list for the first time this year...read on to find out which companies came out on top.

Upstart streamers, returning champs and a batch of fresh faces caught the industry’s eye this year in Kidscreen’s Hot50 ranking of the top companies in children’s entertainment.

In the broadcasting category, Netflix took the top spot for the seventh consecutive year—a result no other company has been able to achieve since the Hot50 launched in 2014. The SVOD had a busy year expanding its preschool and live-action slates with new series including Kuku Studios’ Go! Go! Cory Carson and Bookmarks: Celebrating Black Voices (pictured), along with premiering animated features like The Willoughbys and Over the Moon.

Meanwhile, new streamers Disney+ and AppleTV+ ranked second and sixth respectively in their first year of Hot50 eligibility. Could 2021 be the year when Disney+ unseats Netflix? Considering that the House of Mouse plans to spend around US$9 billion annually on content for Disney+ by 2024, and is targeting more than 100 new titles a year to keep it refreshed, it’s quite possible.

Unsurprisingly, the majority of this year’s ranked companies pointed to how they’ve pivoted their businesses during the pandemic as a top accomplishment.

PBS KIDS and 9 Story Distribution International took the top spots in digital media and distribution respectively for the second year in a row. To help children stuck at home during lockdowns, PBS KIDS launched at-home learning resources that increased streaming by 30%, gameplay by 40% and downloads by 70% for games and video apps. For its part, 9 Story supported clients in the wake of COVID-19 by offering flexible contracting structures and payment terms.

Canada’s Sinking Ship Entertainment rose to the challenge by delivering quick-turnaround shows like Lockdown, which won a Prix Jeunesse award of distinction for COVID-19 programming earlier this year. This content nimbleness also elevated Sinking Ship to a number-one ranking in production, the company’s first-ever Hot50 crown.

Rounding out the categories, The LEGO Group was triumphant in licensing after finishing second to Spin Master in 2019 and 2018. The Danish brickmaker and former three-time Hot50 champ had a big year in partnerships with the likes of Nintendo and Universal Pictures.

Here are the complete ranking lists:

This year’s Hot50 companies are featured in a special digital issue available for download here. The number-one rankings will be recognized as part of an online Kidscreen Awards ceremony taking place during Kidscreen Summit Virtual on Tuesday, February 9.

Now in its seventh year, Kidscreen’s Hot50 rankings are determined by industry voting that’s open to its 16,500-plus print and digital subscribers.