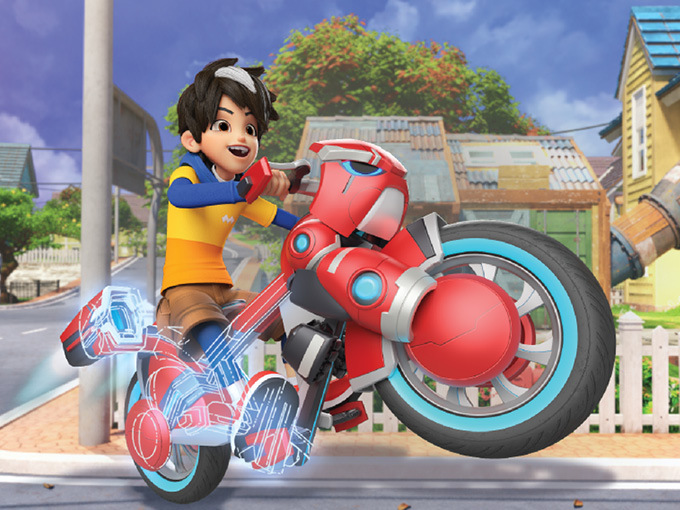 Cartoon Network is revving up Malaysian studio Monsta’s new action-comedy Mechamoto (pictured) to air across APAC in Q4 2021. The kidsnet has greenlit the 26 x 22-minute animated series, which follows a young boy with the power to turn any object into a high-tech device.

Mechamoto is available for pre-sales, with VOD, OTT and free-TV rights available. Monsta has also produced a feature-length movie for the brand.

Irish broadcaster RTÉjr has ordered Distillery Films’ 26 x seven-minute series Sullivan Sails to broadcast in fall 2021. The preschool adventure casts off with explorer Sullivan and a talking fox named Benji, who dream up new places to travel to. Ireland’s Distillery Films will start producing the series early next year.

Jetpack Distribution has picked up worldwide rights to Green Gold Animation’s Netflix original series Mighty Little Bheem. Jetpack acquired season one (21 x 5.5 minutes) and two (28 x 5.5 minutes), as well as three six-minute specials. The London-based distributor has global pay-TV, free-to-air, catch-up and in-flight rights to the non-dialogue preschool series. As a Netflix original, Mighty Little Bheem launched in 190 countries in 2019, and more than 27 million households streamed the show worldwide last year, according to Jetpack. A spinoff of Green Gold’s Chotta Bheem series, it follows a super-strong toddler who gets into all sorts of mischief in his Indian hometown.

Produced by Spiffy Pictures and Fred Rogers Productions, this 80 x 11-minute series is set to premiere in the US on PBS KIDS in 2021. The preschool comedy tracks puppet Donkey Hodie and her animal friends as they navigate everyday problems with humor and friendship. It’s created by Spiffy Pictures’ Adam Rudman and David Rudman, and developed by Ellen Doherty, chief creative officer at Fred Rogers. This distribution deal follows on the heels of Fred Rogers Productions naming 9 Story Brands as worldwide licensing and merchandising partner for the brand (excluding the US).

Hardball revolves around a kid who moves from New Zealand to Sydney, Australia, where he’s thrust into his new school’s ultra-competitive handball games. It has already been picked up by France Télévisions.

A second season is in production in Sydney and will be available in the first half of 2021.