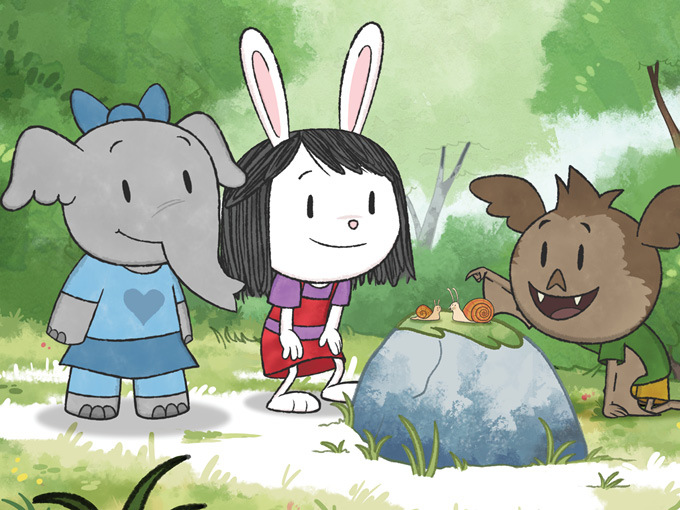 Bringing science to the kid level in Elinor Wonders Why

The new PBS KIDS series from scientists Jorge Cham and Daniel Whiteson gives children a blueprint for learning more about the world.

The show premiered on September 7 and offers a fresh take on learning by answering real kids’ questions about all things science. It features a bunny named Elinor, who hops along on adventures to learn more about the world with her friends.

Whiteson, an astronomer and physicist, and mechanical engineer Cham—both PhDs—have advanced knowledge of science, and a passion for communicating that knowledge to other people. Cham may be best known for his popular PHD Comics strip, but the duo have also made a science-focused podcast (Daniel & Jorge Explain the Universe) and written a book (We Have No Idea: A Guide to the Unknown Universe) with the goal of inspiring a love of learning in adults. Their biggest challenge, however, was taking their PhD-level knowledge and translating it into an understandable 40 x 11-minute preschool series, says Cham.

To make the series engaging for young audiences, the creators focused on answering questions posed directly by kids, Whiteson says.

“There was a learning curve in speaking to kids about science, but the team of educational advisors at PBS helped us create a model to encourage kids to ask questions and find out answers themselves, instead of just going to adults,” he says.

In each episode, the characters formulate a question based on something they observe—why does a lizard want to sit on a sunny rock, for example—and then they experiment to find out the answer. The format (observe, question, experiment) offers children a toolkit for learning about the world around them, says Whiteson.

Not all kid-led questions are easily answered, says Cham, who was particularly challenged by a query about whether plants grow on the moon. But he and Whiteson were still able to explore a variety of topics, from animal camouflage, to different environments, to the similarity in bees and humans being attracted to color and smell.

PBS International is the distributor of the series and PBS KIDS has expanded Elinor Wonders Why into educational games that let kids explore and learn about different environments. The creators are hopeful that the show and its digital content will encourage a love of scientific inquiry among kids.

“Kids are naturally curious, and even the ones who didn’t think of themselves as little scientists can see their curiosity reflected and validated through the characters,” Whiteson says. “Our mission is to get the public excited about science, and the show is a great opportunity to produce and nurture curiosity.”