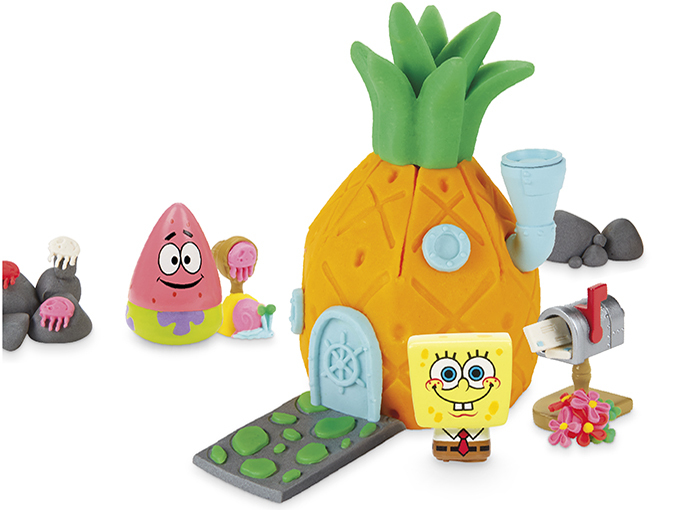 Hasbro is taking its classic compound into the construction category for the first time, with a new range that lets kids build iconic sets.

Who lives in a pineapple under the sea? SpongeBob Squarepants, of course. Only now, that pineapple is made of Play-Doh.

Hasbro is expanding into the construction category with Play-Doh Builder, a new range that lets kids use the classic compound to cre- ate playsets. Each kit includes Play-Doh, tools to construct the playset, decorations and plastic figures to play with around the structures. In addition to classic buildings like a treehouse and ice cream stand, there will be holiday- themed kits—like a gingerbread house—and licensed offerings that feature brands like Nickelodeon’s SpongeBob and DreamWorks Animation’s Trolls.

“Play-Doh Builder really came out of the insight that kids want to see their creations come to life,” says Kate Martino, Hasbro’s senior director of brand strategy and marketing for Play-Doh. “It’s a little more difficult to build in 3D with a compound like Play-Doh, but the range comes with tools that make it possible.”

Traditional Play-Doh kits have focused on free play and extrusion tools—think of the compound being pushed out of an ice cream machine like soft-serve, or through a character’s head like hair. The Builder sets let kids roll the Play-Doh into sheets and use molds to cut out shapes that fold into each other to create structures. Some of the bigger buildings also come with a plastic frame to support the com- pound. Stamps, extruders and decorative plastic pieces bring the playset to life (an awning and door for the ice cream stand, for example, or a walkway and mailbox for SpongeBob’s digs). Kids can then use the figurines to play in and around their creation.

“The majority of the structure is Play-Doh,” Martino says. “We wanted to make sure the essence of the compound was still there.”

The first SKUs will hit shelves globally this month, with additional products launching in October. The range is available for US$4 to US$14.99 at major retailers.

Martino says Hasbro plans to continue to build out the line with new licensing partners. The toymaker is looking for brands that appeal to the younger set (Play-Doh generally targets kids ages three and older) and feature instantly recognizable buildings. SpongeBob’s pineapple home is iconic, she says, while the tour balloon from Trolls World Tour was integral to the animated sequel.

“It’s really about bringing those memorable buildings to life. If there is a structure that’s really synonymous with a character, that’s what the team is looking for.”

Play-Doh Builder will expand in 2021 with new items and new partners, and Martino says Hasbro is looking at the range as a launchpad to continue evolving the classic compound after new textures (such as slime, foam, putty, crackle and super cloud) rolled out in 2019. These new lines were designed to capitalize on the DIY slime trend taking over YouTube, and broaden Play-Doh’s appeal to older kids and tweens.

“We’re coming up on our 65th birthday next year, and Play-Doh continues to evolve,” she says. “I think Builder is a great example of that effort towards innovation.”