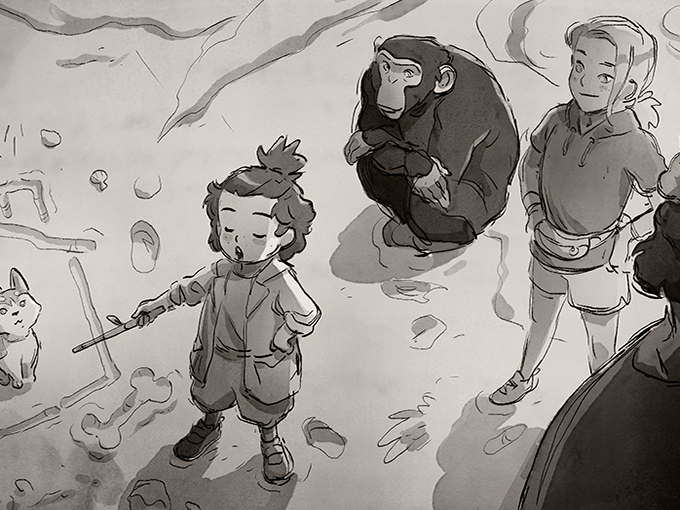 The new French office will give the Danish prodco a chance to tap new talent and build on its Scandi-inspired storytelling, says the Prince Ivandoe producer.

Sun Creature is blending its Nordic sensibility with the artistic flare of French talent to better reach international audiences. To do this, the Denmark-based prodco behind Cartoon Network’s The Heroic Quest of the Valiant Prince Ivandoe has opened a new studio in Bordeaux, France.

The Danish studio originally established itself with productions for older audiences that mix colorful imagery with Scandinavian lore and mythos, like its first feature film Flee and animated short The Princess & the Green Knight for Amazon Studios. Sun Creature has since expanded into kids and family projects and was looking to other markets to support a growing pipeline.

Sun Creature favors traditional and elegant art inspired by Denmark’s folklore. It achieves a dimensional and cinematic look by avoiding clutter in the frames. It’s a style that complements the high-quality and realistic 2D animation that permeates a lot of the work coming out of France, Dousse explains.

Season two of Prince Ivandoe is currently in production at the new location and the company is also developing a supernatural adventure series for eight to 12s. Where it Falls (pictured, six x 30 minutes) tracks a family’s journey to reunite after a global event causes the world to shift, and Earth’s gravity is disrupted.

Expanding into France isn’t without its challenges, however, and maintaining strong communication between locations will be an ongoing effort, says Charlotte de la Gournerie, co-owner and exec producer for Sun Creature. It’s also expensive to launch a new studio, an endeavor made even more difficult because the country has a crowded animation scene, she adds.

But a presence in Bordeaux also brings with it a lot of benefits. The lack of deep-rooted animation industry in Denmark has hampered Sun Creature’s growth in the past. With a location in France, the company can access financial credits through the region’s robust tax scheme. It can also connect with more burgeoning talent through the country’s established animation schools, some of the best globally. French artists based in Denmark already make up 30% to 50% of the studio’s team, and the hope is that moving forward, the new location will help attract even more talent to help build up its expertise.

“It pays off to be ambitious, and, when we challenge ourselves visually, we believe our work stands out to broadcasters and investors,” says de la Gournerie. “Having that French quality of animation with the Scandi mythos [will] let us make art we like and that appeals to audiences.”