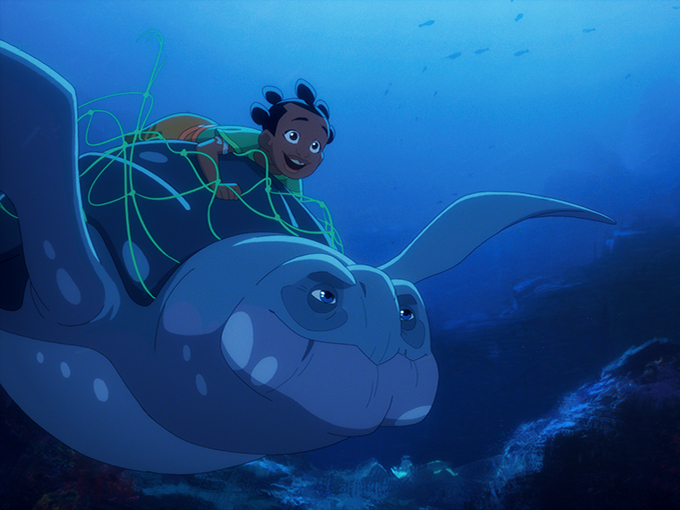 Lucan comes out of its shell with first IP

Inspiration for a new kids show can come from anywhere, but it doesn’t usually come from a documentary about turtle poaching in Mozambique…unless you’re Clayton Koski. While working on a still-unnamed documentary about conservation, Koshy was struck by the  idea that there might be a better way of bringing the  message of turtle protection to audiences.

He started writing a script about a little girl with a turtle-saving mission, approached South African animation studio Lucan, and that’s how Isaura was born.

The idea has morphed into a 13 x 22-minute series aimed at kids seven to 11. And after years of primarily handling service work on commercials, it marks Lucan’s first foray into original IP.

The animated tale stars a girl in Mozambique who, after risking her own life to save a turtle, is rewarded with a powerful talisman that lets her breathe underwater and communicate with the reptiles. The serialized action-adventure spins off as she meets other kids who can also communicate with endangered species.

“Turtles are kind of the barometer of the sea,” says Koski. “Because they live in the ocean and reproduce on land, if the turtle population is healthy, it’s a sign that the sea is healthy.”

Shelled reptiles aside, setting the story in Mozambique provided the team with a unique opportunity, says Andrew McNally, creative director at Lucan. Many broadcasters are looking for stories from and about regions that were previously ignored by mainstream entertainment.

Lucan and Koski spent a lot of time thinking how they should represent Mozambique on screen since the country is often shown in a negative light, when it’s shown at all.  “We’re so used to seeing the region’s inhabitants, especially women and children, as victims of  environmental devastation,” says McNally. “I think a huge part of this show for us was making sure Isaura was a strong African character taking charge of her own fate.”

Cape Town-based McNally and his art director Wian van Bergen spent two weeks in Mozambique to make sure they nailed the art style and setting. For example, with Mozambique situated along a humid and salty coastline, manmade structures and materials often don’t survive. “Plaster on the wall starts crumbling, paint flakes off, steel rusts,” says McNally. Nature blossoms in this environment, and there is a textured look to the landscape, with plant life thriving. To reflect this, van Bergen created digital paintings for the backdrops, layering on 2D characters and foreground elements.

Isaura is finished its second phase of development, with Lucan actively looking for streaming and  broadcast partners.

Production will be entirely based in Cape Town, which up until recently had been under-represented on the global stage. Then in 2018, Black Panther came onto the scene and made US$1.3 billion worldwide.

“Although Black Panther was made in the US, it focused on an African country, had an African cast, and had a lot of local talent in it. I think it proves  the appetite for content coming out of the continent,” says McNally.

Lucan also sees a boost coming from the popularity of fellow South African animation studio Triggerfish, which has been a hot name in the kids space since Netflix picked up its series Mama K’s Team 4. Lucan wants to corner some of the regional attention to showcase both Isaura and its superhero series concept Kwezi to buyers.

“That these [studios] are thriving and things are happening is a good indicator that more [big] projects will happen in South Africa in the future,” says McNally.