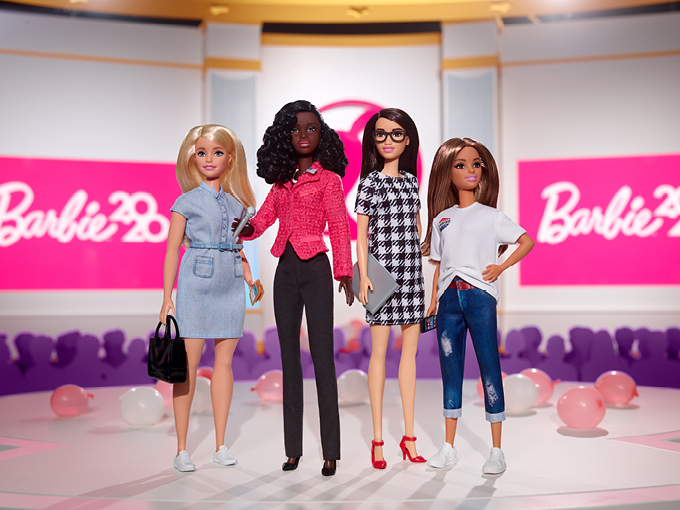 Mattel gets ready to run for office with Barbie

Barbie is getting civically minded with a new range of dolls, as the toyco partners with She Should Run to encourage girls to consider careers in politics.

Mattel is getting political with its newest Barbie products. Designed to expose kids to public leadership roles, the Barbie 2020 Campaign Team set includes dolls that represent a candidate, campaign manager, fundraiser and voter.

Barbie has run for office seven times since 1992, and has already served as both President and Vice President. Mattel’s newest politically focused range, which launches ahead of the 2020 election, is meant to highlight the importance of voting and features dolls of different ethnicities to remind all girls that they can have a place at the podium.

This representation was especially important because less than a third of elected leaders in the US are women, and Black women are even less represented in those leadership positions, says Mattel’s SVP and global head of Barbie and dolls, Lisa McKnight. In order to encourage girls to explore their potential role in politics, Barbie Dream Gap Project provided funds to the non-partisan nonprofit group She Should Run. Some of those resources will go to She Should Run’s Help Her Lead program, which connects young girls with role models and guidance to inspire them to run for office.

The Barbie 2020 Campaign Team set is available online with major retailers for US$39.99, and additional resources including play ballots and printable activities are available through the brand’s website.

This new range comes as Mattel continues to evolve its Barbie offerings. The toyco recently launched Barbie products tied to the Olympics, focusing on Barbie’s abilities as an athlete, and last year partnered with the European Space Agency in an effort to encourage girls to become astronauts, engineers and space scientists. Barbie was also Mattel’s first brand to announce its Play Fair commitment, a pledge to increase Black representation in its products and content.

Barbie has proven to be a source of growth for Mattel, even as the COVID-19 pandemic continues to negatively affect many toymakers. Mattel’s gross sales declined 15% to US$815 million in Q2 2020, but Barbie saw a 7% increase in gross sales (to the tune of US$199.3 million).

Barbie, covid-19, Mattel, She Should Run