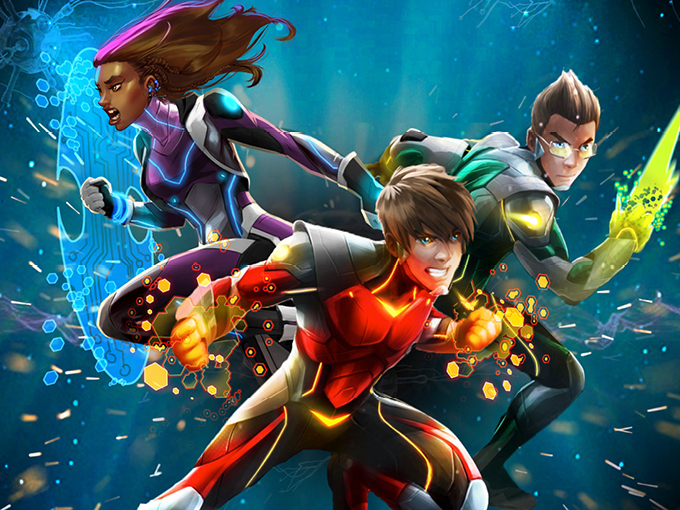 From hopeful comic book series to franchise with movie and CP potential, APNG's J.D. Matonti has brought Jetpack and Joester Loria Group on as partners for his new TV series.

Originally launched in 2008, the IP’s futuristic sci-fi comic books are printed and distributed by Marvel Comics. Both the comics and the show are set during a war over nanotechnology, with kids, creatures and AI battling to bring peace to new worlds.

London distributor Jetpack has acquired global rights to the 13 x 22-minute action-adventure series, which is in pre-production. Aimed at kids seven and up, NEW-GEN will stand out from other superhero-led content because it presents a more Utopian look at technology and the future, and also carries a hopeful message for kids, which resonates in today’s stressful environment, says APNG owner and the brand’s creator J.D. Matonti.

“Ever since we first launched as a comic book, I’ve been interested in turning it into a series as a way to introduce the characters to new audiences,” says Matonti. “Especially today, the new show can speak to children because it presents a positive future.”

Canadian animation studio Bardel (The Dragon Prince) is producing the show with APNG (which stands for the Association for the Protection of the New Generation, named after a faction in the comics), and Matonti, Chris Matonti and Julia Coppola have producer roles. Brent Friedman (Star Wars: The Clone Wars, Star Wars: Rebels) will serve as showrunner and writer, along with co-writer Eugene Son (Avengers Assemble, Ben 10). The show’s budget is between US$550,000 and US$600,000 per episode, and delivery is expected in 2021, says Matonti.

APNG has already landed some up-and-coming actors to fill out the cast, including brothers Finn Wolfhard (Stranger Things) and Nick Wolfhard (The Last Kids on Earth) and Anya Chalotra (The Witcher). APNG is now looking for broadcast partners in the market for a series with an existing audience that can support its growth into new categories, Matonti adds.

APNG has been working on expanding the IP over the last decade. In 2011, it launched a second comic series titled NEW-GEN: New Dawn to explore the origins of some of its more popular characters. The company has since outlined plans to expand into live-action feature films and build a multiplatform franchise around the show.

Matonti is already thinking about merchandising opportunities, working with New York-based Joester Loria Group. The licensing agency is developing a program that will translate the show’s many gadgets and characters into consumer products.