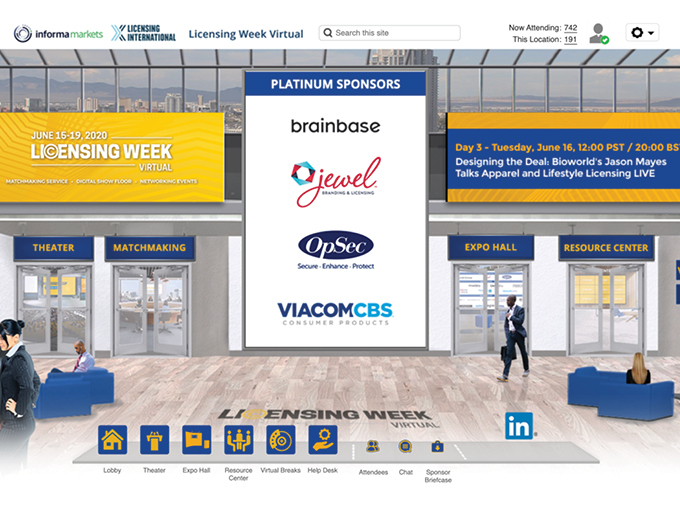 They say the house always wins in Sin City, but this is especially true when you visit Las Vegas by way of your living room.

Licensing Expo was set to celebrate its 40th anniversary this year, but instead joined the long list of events cancelled due to the COVID-19 pandemic.

To replace the in-person event—industry experts will next gather in Las Vegas for the trade show May 25 to 27, 2021—Global Licensing Group organized an online offering. Licensing Week Virtual took place June 15 to 19 and featured digital keynotes, educational seminars, matchmaking, networking and exhibitions.

“It was no mean feat,” says Anna Knight, VP of Global Licensing Group. “We built the event in 10 weeks, and it was probably the most contracted planning any of us have been faced with.”

While Licensing Week Virtual did replicate some of the in-person event’s key characteristics (including Licensing Expo’s matchmaking program and exhibition booths), Knight says the goal of an online trade show shouldn’t be to replicate an in-person event.

“This is meant to augment the program moving forward,” she says.

That focus on adding to an in-person trade show will become easier, she says, as technology continues to develop. Licensing Week Virtual’s matchmaking program and exhibition efforts were hosted on separate platforms, for example, which is something Knight says the team will change for future online events.

“What you can do is really dependent on the platforms that are available,” she says. “There are so many more options now, and that means more freedom moving forward.”

But as sophisticated as digital events may become, Knight knows there are some aspects of in-person shows that may never fully translate to their online counterparts. It’s difficult to simulate the networking that happens spontaneously, for example, as participants run into each other in hallways or elevators. In an effort to approximate this experience, Licensing Week Virtual scheduled digital breaks to allow attendees to meet outside of scheduled appointments.

Online offerings available in the comfort of your own home do have the edge when it comes to convenience, however. This year’s 4,431 participants included a number of industry members who previously were unable to attend due to budgetary restrictions or because licensing is only a peripheral aspect of their job. Knight says Licensing Week Virtual opened the event up to these new attendees and created opportunities for building new connections. In fact, 2,933 matchmaking meetings were attended (nearly the same amount that happened at last year’s in-person show in Vegas).

One significant complication, however, was navigating time zones. No matter what timing the team chose, some participants would find it inconvenient. To combat this, a number of the panels were pre-recorded so attendees could watch them at their own pace.

“People’s behaviors have changed, the nature of their work has changed, and possibilities around travel will change,” Knight says. “If we don’t deliver on virtual events as well as the in-person show, we won’t be meeting those new expectations. Finding a balance between the two will really be the key, and moving forward we will have to rethink everything from the bottom up. It’s not about replicating each element of the physical event, and we want to be bolder about the [virtual] format in the future.”