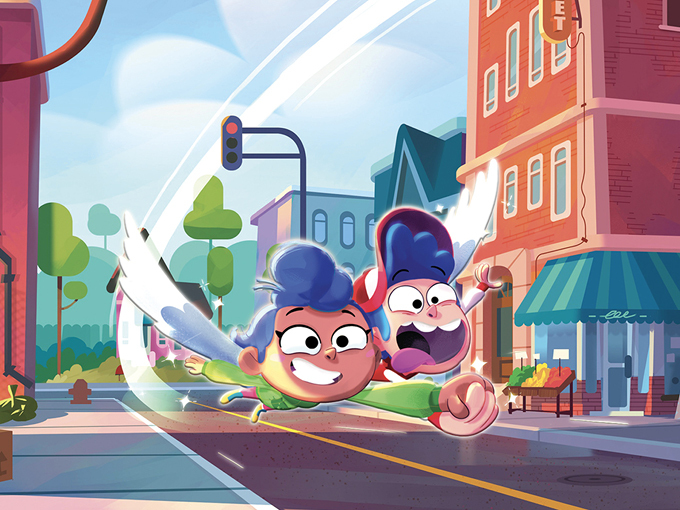 To meet broadcasters' growing demand for shows that push the style envelope, the studio developed 50/50 Heroes with new animation software.

The 52 x 11-minute 2D comedy is about half-siblings Mo and Sam who find out they have inherited powers from their ancestor. But there’s a catch: They have to share the powers, and their abilities won’t work right unless the kids work together. France TV will stream the show on its SVOD Okoo at the beginning of 2021, and Cyber Group expects to deliver the first episodes a year from now, says Pierre Sissman, Cyber Group’s CEO and president.

While the series pitch began before the pandemic took hold, the deal was finalized while in lockdown, says Sissman. But because so much of the business is conducted via video calls already, once Cyber Group showed France TV the art, and pitched the story as something beyond the usual superhero show, there was a definite desire to go forward, he adds.

Creating a superhero series that didn’t fit into the traditional action/adventure genre was a big motivator behind wanting to make the show, says Tiphaine De Raguenel, the director of youth content and animation at France Télévisions in a statement. The series also appealed to the broadcaster because it blends comedy with positive depictions of siblings learning and growing together, she adds.

50/50 Heroes is based on an original idea from Romain Gadiou and Chloé Sastre (Mirette Investigates, Tom Sawyer), with Cédric Fremeaux (Chip ‘n’ Dale) directing. The studio has heard from multiple broadcasters recently that they want original ideas that push the envelope on both a technical and story side, says Sissmann. To deliver a look that stands out, Cyber is producing the show from both its Paris and Roubaix-based studios, while also using special effects technology that its research and development department crafted. To deliver on both these elements, it’s also been building up a cartoon and comedy slate over the past few years and this is the first new project its made with those needs in mind, Sissmann adds.

“Once we have the first few episodes completed we’re going to start selling the series [to other markets], but I’m confident the show will succeed because it tells a different story that’s funny, exciting and will have top-notch visuals,” says Sissmann.

The Paris-based studio, which is behind Taffy and Gigantosaurus, has been busy building up its slate this year. As part of that effort, it teamed up with Russian studio Soyuzmultfilm to launch a joint production partnership focused on making new 2D-animated preschool series for the Russian market. The first of these is the in-production series Orange Moo Cow, and the in-development Squared Zebra, which were both picked up by Russia’s Channel 1.