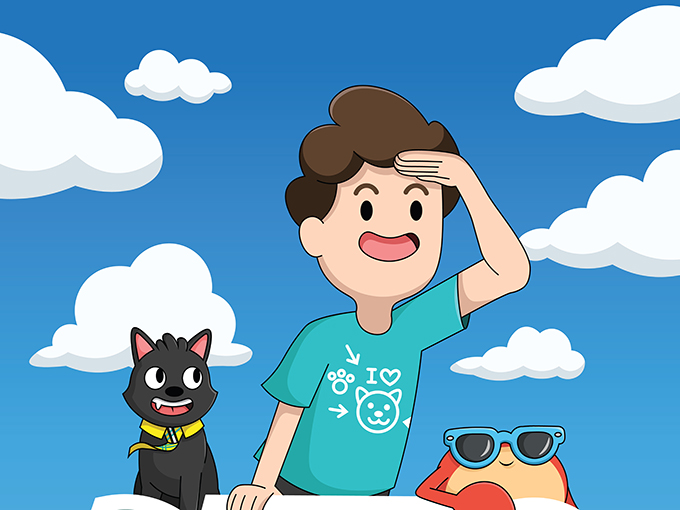 Inside the Headspinner strategy for Denis and Me

The Canadian prodco will rely on YouTube to generate licensing opps, but is looking to linear and VOD to finance more content, says Michelle Melanson.

When Headspinner Productions launches its first animated kids series, Denis and Me (pictured), on YouTube in September, the Canadian prodco plans to use the platform to generate awareness of the brand and grow its existing consumer products program.

According to Headspinner co-founder Michelle Melanson, the prodco isn’t expecting to make revenue through ad sales because the Google-owned platform ceased serving personalized ads on “made for kids” content in early January. The change was implemented by the US Federal Trade Commission to make YouTube safer for kids.

Denis and Me, which will also run as part of the WOW! World Kids Collection on Bell Media’s Canadian SVOD service Crave, is a 10 x three-minute 2D-animated series. Targeting six to 11-year-olds, the series was created by and stars YouTuber Denis Kopotun. The comedy is inspired by Kopotun’s life and YouTube channel, which features videos of the 23-year-old Canadian influencer playing popular kids video games like Roblox and Minecraft, while creating funny stories with his plush cat sidekick Sir Meows A Lot and other recurring characters. Since launching in 2016, it has generated more than 8.5 million subscribers and has topped three billion views. Although it’s not a designated kids channel, the majority of its viewers are kids, says Melanson.

The channel’s online store, run by influencer merchandise company Juniper, has also sold US$5 million in products, to date. (Headspinner, meanwhile owns the consumer products rights to Denis and Me.)

Denis and Me, has been in the works since September 2018, with Melanson (The Next Step, Stella and Sam), showrunner/producer Diana Moore (Ollie the Boy Who Became What He Ate, Stella and Sam) and Kopotun at the helm. Moore also co-created the show. Denis and Me features a teenage version of Kopotun who lives with his best, but villainous, feline friend Sir Meows A Lot in an alternate reality world where the characters are not really adults, but not quite kids either. The show also plays off cat memes and turns them into storylines. Kopotun is voicing all of the show’s characters, while Cartoon Conrad in Beaverbank, Nova Scotia is handling the series’ animation.

Melanson says the strategy is to launch the first two episodes of the series on the main Denis YouTube channel in Canada, and the next eight episodes will be available on Crave, which has a four-month, non-exclusive window. Headspinner will rebrand Kopotun’s Sir Meows A Lot channel as Denis and Me for launching the series internationally on YouTube (Canada will be geo-blocked). A Juniper-run Denis and Me store will also launch on YouTube and will contain at minimum plush, apparel, posters and backpacks.

Melanson says Headspinner is actively looking to make deals around the world with linear and VOD channels to help fund more episodes.

“The goal is to make an additional 20 to 40 shorts, and we are in the process of putting the financing together for those,” she says.

Headspinner budgeted US$374,612 for the show’s first 10 episodes. The Canada Media Fund provided US$16,790 for development, while Bell offered 10% of that total, which allowed the prodco to prepare a bible, scripts and an animatic. Financing for 75% of the rest of the budget came from the Shaw Rocket Fund’s new Kids Digital Animated Series program, which launched last year in partnership with the Canada Media Fund. Producer investment and tax credits covered the remaining 25%.

“The budget is very high per episode to keep the quality up,” says Melanson. “We’re now trying to raise money so we can amortize and make more eps at a time, but for less.” She says the prodco is also open to expanding Denis and Me to seven and 11-minute episodes.

So far, interest is growing around the series—Disney Asia has reached out to the producers for a discussion along with a pair of distributors—but this wasn’t always the case. Moore says the biggest challenge has been for buyers to overcome the stigma associated with working with YouTubers. “In the early days of our pitching, when we would mention the show was coming from YouTuber there were a lot of skeptical buyers,” says Moore.

At the time, many broadcasters were nervous about working with young adult influencers especially after Logan Paul—a popular YouTuber and former Disney actor—caused controversy for posting a video relating to suicide.

Melanson notes that in the last six months attitudes have been changing, but confidence in influencers is still a contentious issue.  “I noticed in my pitching at Kidscreen Summit there were buyers that absolutely wouldn’t go with an influencer or a YouTuber on their linear channels, but others like Nickelodeon were fine with it,” she says. “Obviously when we went down this road we had conversations with Denis about his goals and, lucky for us, he is one of the most genuinely caring people and the kids audience is the space he truly wants to be in.”